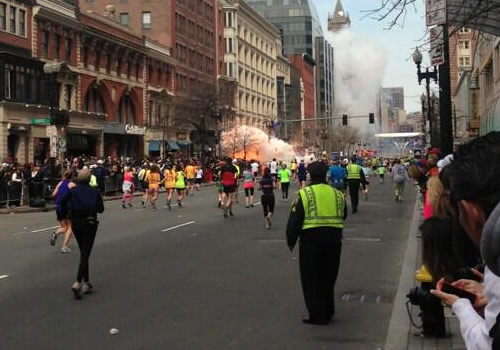 The scene near Copley Square, captured by a Twitter user Photo: Dan Lampariello/Twitter

Three people have been killed and at least 140 injured after two explosions hit the finish line of the Boston Marathon.

Police said that there were two simultaneous explosions at 2:50pm local time, about 50 to 100 yards apart and that each scene resulted in multiple casualties.

Runners were still finishing the race as the blasts hit and initial reports suggest that many of those injured were spectators at what is one of the most popular sporting events in the US.

One of the dead was an eight-year-old boy, according to US media reports. At least 17 people are critically wounded and the injuries include several amputations.

Bloodied victims were initially rushed to a medical tent set up to care for fatigued runners. Police later confirmed that “all the victims have been removed”.

A televised statement from US president Barack Obama said that authorities “continue to monitor and respond to the situation as it unfolds”.

Obama continued: “We don’t yet have all the answers. Multiple people have been wounded, some gravely, in explosions at the Boston Marathon.

“We’re still in the investigation stage. But I just want to reiterate: We will find out who did this and we will hold them accountable.” 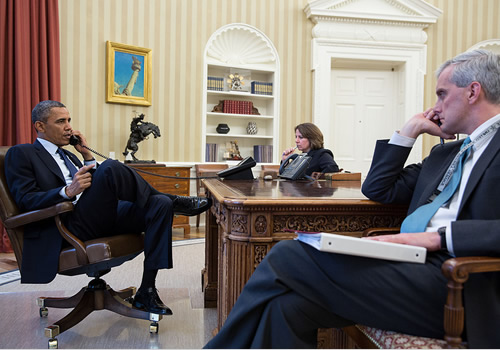 President Barack Obama has been briefed over the telephone by FBI director Robert Mueller on the explosions at the Boston Marathon (Photo: Official White House Photo by Pete Souza)

New York police stepped up security around landmarks and prominent hotels in response to the blasts.

Following the blasts, British police have said that security for the London Marathon on Sunday will be reviewed.

London Marathon chief executive Nick Bitel said: “We are deeply saddened and shocked by the news from Boston.

“Our immediate thoughts are with the people there and their families. It is a very sad day for athletics and for our friends and colleagues in marathon running.

“Our security plan is developed jointly with the Metropolitan Police and we were in contact with them as soon as we heard the news.”