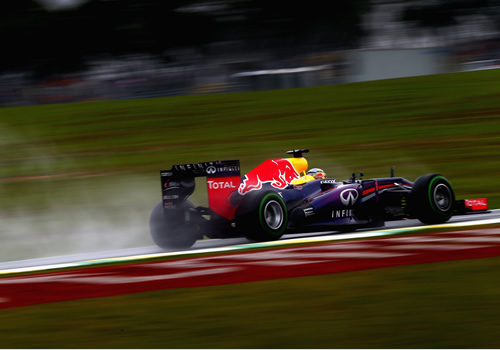 Sebastian Vettel stormed to his ninth pole position of the season in a rain affected qualifying session at the Brazilian Grand Prix at Interlagos.

Mercedes rival Nico Rosberg completed an all-German front row of the grid while Fernando Alonso, secure of second place in the overall drivers’ standings, was third in his Ferrari.

Red Bull’s Mark Webber, in the final Grand Prix before a New Year switch to endurance racing, will start from fourth ahead of top ranked British driver Lewis Hamilton in the other Mercedes.

Vettel praised his team’s quick thinking as they transitioned to intermediate tyres and admitted the track conditions took him by surprise.

“If there’s too much water on the track, the risk of aquaplaning is too high,” said Vettel.

“We got out and I was surprised how much of the water had gone. I went straight to the intermediates and got a good lap straight away. I tried again and was close. I’m happy with both my laps. It’s great in these conditions to get it all right.”

Rosberg was certainly happy with his performance as he goes in search of his fifth podium performance on the season on Sunday.

“It was a good day,” he said, after recording the 16th front row position for Mercedes this season.

“Everything went to plan and the whole team did a good job. We had a perfect strategy in the end on inters. It’s a great place to start tomorrow, at the front of the grid.”

Alonso admits he is already looking to next season after a campaign of obvious frustrations – and admits he won’t mind if race day brings more wet
weather.

“Usually we are better in the wet, so we have been waiting for a wet race, but unfortunately it came in the last race of the season,” he said.

“It makes a change to be so far up the grid. Obviously it was not possible to beat Seb who is too far ahead. I lost seven or eight tenths in turn four and I think second could have been possible, but I’m not sad with third. We have an opportunity starting so far up the front.”