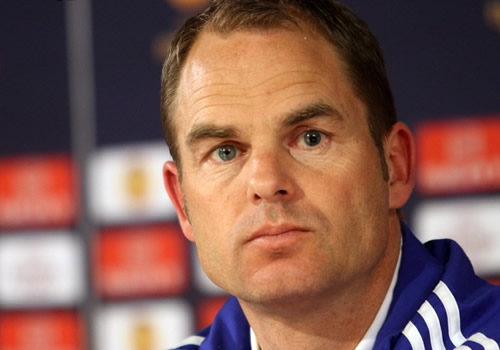 Frank de Boer has ruled out managing abroad despite admitting that Brendan Rodgers is struggling at Liverpool.

The Ajax manager has been heavily linked with the Northern Irishman’s position in recent days after his brother, Ronald, claimed that the former defender would be interested in the Anfield job.

The thought of coaching abroad doesn’t tickle me yet

However, De Boer, who has masterminded three successive Eredivisie title triumphs, refused to talk about speculation linking him to Rodgers’s post out of respect for the 41-year-old boss.

“I don’t want to talk about Liverpool. Also out of respect to Rodgers, who’s had a fantastic season and is struggling now,” De Boer is quoted as saying.

“As long as no one contacts me, I don’t want and don’t need to think about it. I’m busy with Ajax. And if nobody calls, I’m very happy to stay here. There is still a lot to accomplish.

“I might decide that anyway. The thought of coaching abroad doesn’t tickle me yet.”