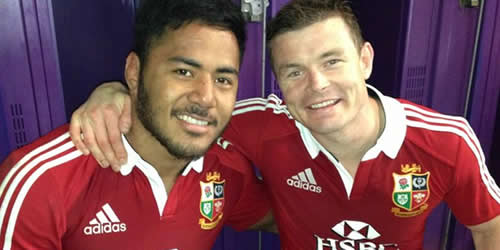 Manu Tuilagi admitted it was “an honour” to play alongside Ireland legend Brian O’Driscoll after the British and Irish Lions secured a 69-17 victory over Western Force.

Warren Gatland’s men were emphatic winners in their second warm-up match, with O’Driscoll and Tuilagi forming an enterprising partnership in Perth.

The Leicester Tigers centre combined with the Leinster veteran to allow the 33-year-old score his second try of the match after the Ireland No13 touched down in the first half.

Ahead of the Force clash, O’Driscoll said he would be following the powerful Tigers back around the pitch hoping to avail of any openings, but Tuilagi insisted he benefited from playing alongside the Irishman.

“It’s the other way round – it’s me following O’Driscoll,” Tuilagi told Rugby Media.

“He’s a legend. Just to be able to play alongside him is an honour. He showed out there again today how class he is as a player – and a person as well. It was an amazing feeling.”

The 22-year-old Lions debutant also said Gatland’s men were pleased that they got a proper challenge from Western Force despite facing a weakened side.

“We’re very pleased with the score. We did some good stuff and we’ve still got something to look back on tomorrow and look forward to the next game,” he added.

“Western Force put up a good challenge. At some points, they put us really under pressure – in the first half mainly.

“It took a while to break them down in the second half and finally in the last 30 minutes, we made the breakthrough.”