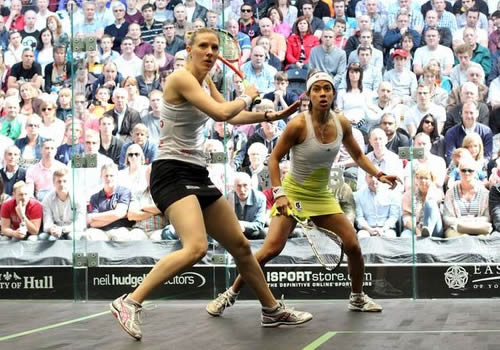 Laura Massaro has become the first Briton in 22 years to win one of the biggest prizes in squash, the Allam British Open.

She beat the seven-time world champion and the top-ranked woman for almost seven years, Nicol David, 11-4, 3-11, 12-10, 11-8. The victory marked Massaro’s third World Series title and the 12th of her career.

All the signs pointed to another title win for the four-time British Open champion David when she advanced to the final without dropping a game. However, world No2 Massaro, who also defeated the world champion on her home-turf in the Kuala Lumpur Open in March, dropped just one game to David on her way to winning what has been dubbed ‘the Wimbledon of squash’.

One of the elite Platinum events in World Series squash, the women’s tournament is worth prize money totalling $90,000, and was last won by a home player, Lisa Opie, in 1991.

David was not the only world champion and world No1 in action. In the men’s tournament, Ramy Ashour also made history by becoming the first Egyptian in 47 years to win the British Open title.

Despite producing a plethora of world champions and world No1s, Egypt has not boasted a British Open champion since 1966. But Ashour, undefeated since losing the 2012 final in London exactly a year ago, was the firm favourite and, despite dropping the first game, took an emotional victory over Gregory Gaultier, 7-11, 11-4, 11-7, 11-8.

Ashour, who has now won of 41 straight matches and eight successive titles, was clearly delighted to tick off this particular milestone:

“Winning this prestigious title is one of the happiest moments of my life, if not the happiest… I’ve experienced waking up in the morning every day with a heavy heart and a heavy spirit. There have been a lot of distractions. But I’ve learnt a lot from the last couple of weeks. Winning this title is really big for me. It’s something I will always remember.”

Both Ashour and David had another big occasion on their minds and their schedule. From the dramatic, all-glass court erected on the pitch of Hull City football club, both No1s headed straight to St Petersburg for the final presentation to the International Olympic Committee (IOC) executive board.

There, the squash delegation hopes to ensure that squash makes the final cut from the eight sports in contention to join the 2020 Olympic Games Programme.

The board will make its recommendation on 29 May, with the final decision being taken at the IOC Session in Buenos Aires on 8 September 2013.