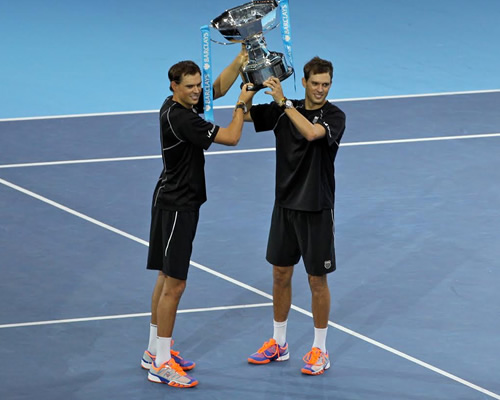 The Bryan brothers with their trophy Photo: Marianne Bevis

Bob Bryan and Mike Bryan won their fourth season-ending title in their sixth championship match at the ATP World Tour Finals in London on Sunday.

“Looking back at the year, we’re very proud of the way it went,” said Mike Bryan.

“If we had to pick one highlight during this great season, it would probably have to be the US Open. It was just a milestone we were shooting for. One of our big goals coming in the year was to try to hit 100 titles.

“We did it luckily at our home Grand Slam when there was a lot of talk about it. To finish year end No. 1 was a huge goal, we did that for the 10th season. That ranks right up there.

“This is considered the fifth slam, with the top eight teams in the world. To lose our first match and bounce back, barely qualify for the semi-finals, win today, was a great feeling.”