Bundesliga wrap: Ben Barker ponders whether Borussia Dortmund are unbeatable in the Germany's top-flight this term 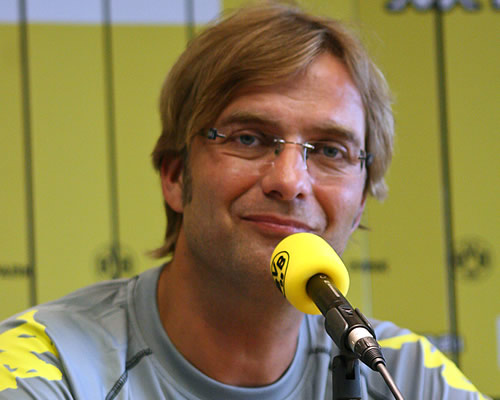 Klopp may be “unsackable” but are Dortmund unbeatable?

During the international break, Dortmund chief executive Hans-Joachim Watzke heaped praise on his side’s manager. “I would never sack Jurgen Klopp”, he boldly claimed. Klopp’s response it seems, was to justify Watzke’s faith by ensuring the Bundesliga leaders made it five wins out of five with a demolition of Hamburg. Summer signing Pierre-Emerick Aubameyang was handed a starting spot in place of Jakub Blaszczykowski and took just 18 minutes before rifling home the first goal of the game. Henrik Mkhitarayan capped off a wonderful team-passing move to double Dortmund’s lead three minutes later, before Zhi Gin Lam hammered home a stunning 25-yard strike for the visitors. Hamburg levelled through Heiko Westermann, but Dortmund began to turn the screw, with Robert Lewandowski, Marco Reus and Aubameyang grabbing four second-half goals to maintain BVB’s perfect start to the season. The score-more-than-you approach has served Dortmund well so far, but while Hummels and Subotic in defence dealt with the attacking threat of Hamburg better than in their previous outing at Frankfurt, Klopp will still be unhappy with the threat his side came under at set-pieces. Still, six goals is nothing to scoff at, and with key men Ilkay Gundogan and Lukasz Piszczek yet to return from injuries, Dortmund look like very strong contenders indeed.

It was a good weekend to be a Swabian. Not only did Stuttgart continue their fine form under new manager Thomas Schneider – picking up a second win in as many games – but they also become the first team since April 2012 to defeat Hertha on home soil. The capital side looked like chalking up another to that impressive tally which didn’t see them lose at home all last season, holding the majority of possession and pressuring the resilient Stuttgart back-line. The early attacking prowess soon dipped, and it would become a match of tactics and goalkeeping heroics from both sides. Stuttgart took the initiative early after the break, with Christian Gentner heading past Thomas Kraft, who earlier had made a terrific save from the midfielder. Berlin tried valiantly to get back into the match, but Kraft’s opposite number Sven Ulreich pulled off three similarly stunning stops, firstly from debutant Per Skjelbred before a magical double reflex save denying Johannes van der Bergh and Anthony Brooks. Berlin’s first loss at the Olympiastadion in nearly a year-and-a-half leaves them just a point above the resurgent Stuttgart.

In stark contrast to Stuttgart, Werder Bremen are suffering from something of a loss of form. Having won their opening two Bundesliga fixtures, Die Werderaner have suffered three consecutive losses and sit in a lowly 14th. Bremen had been hoping to avoid a similar situation to last season – their worst in the Bundesliga for 14 years – but showed little gusto or fighting spirit against Frankfurt. The visitors outplayed Bremen in every area of the pitch, and could have gone into half time with double the two goals they’d scored, courtesy of new boy Vaclav Kadlec. Winger Takashi Inui was in inspired form, and made something happen every time the ball was at his feet, but the Eagles had to wait until 13 minutes from time for their third goal. After Aaron Hunt missed a penalty, Kadlec was denied his hat-trick by the sliding Sebastian Prodl, who in turn put the ball into his own net. Bremen, who played for over an hour with ten men after Franco Di Santo was sent off for a dangerous tackle, will look to pick themselves up ahead of next week’s clash against Hamburg, one of only two sides lower than Bremen in the table.

Fresh back from his one-match ban against Hertha Berlin after getting sent off at Mainz, Luiz Gustavo let the occasion get the better of him once again to pick up a second red card in as many games against Leverkusen. The midfielder somewhat surprisingly snubbed Arsenal and signed for Wolfsburg in the summer, but will now miss another match after he received two yellow cards in a hotly contested game. Gustavo’s sending off all but sealed defeat for the Wolves, after birthday boy Ivica Olic had cancelled out Sidney Sam’s early strike. Wolfsburg were still in the contest when Stefan Kiessling scored just after an hour, but following the red card, they capitulated and allowed Kiessling a second and Leverkusen the three points.