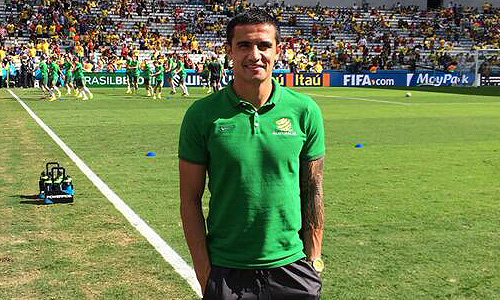 Holland maintained their 100 per cent record at the World Cup as the Dutch were 2-0 winners against Chile to top Group B.

Meanwhile in the other Group B, David Villa, Fernando Torres and Juan Mata all scored in front of newly-retired Tim Cahill as Spain secured a 3-0 victory over Australia.

Here is the best of the Twitter reaction from the professionals, past and present, with plenty of praise for Bayern Munich star Robben.

Ex-Liverpool midfielder Luis Garcia (@LuchoGarcia14) describes Villa’s goal with the same eloquence that he played with: “Can’t believe we are out. Beautiful goal of Villa. Such a beauty backheel.Spain playing well in the last game of their WC2014”

Dutch defender Gregory van der Wiel (@Gvanderwiel) has a good feeling – and the PSG man should trust his instincts: “Difficult match, not alot of chances.. But very dangerous counter attacks. Im positive we will score in the 2nd half.. #nedchi”

Former Holland international Mario Melchiot (@MarioMelchiot) gives United fans an insight into Van Gaal’s methods: “#LOUISVANGAAL use to tell us “Don’t only play the game read it like it’s a book so you can anticipate the ending” #mmlove #WorldCup”

More from Barton (@Joey7Barton): “Whilst the World was watching Ronaldo and Messi, Robben has came along and lit this tournament up. MVP so far…”