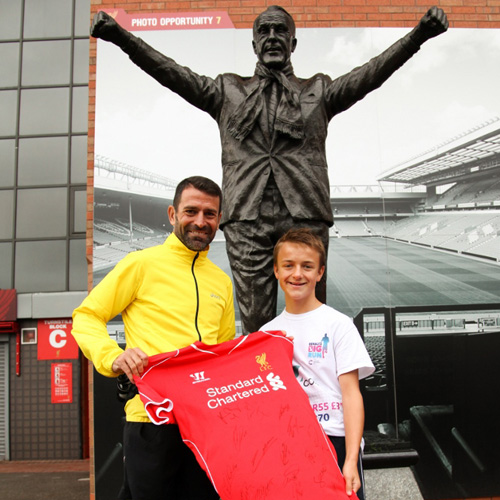 Calum Chambers will develop into a huge asset for Arsenal, according to Southampton legend Francis Benali.

The 19-year-old signed a five-year deal with the Gunners after completing a surprise £16m switch to The Emirates from boyhood club Southampton in the summer transfer window.

Newly-capped England defender Chambers has emerged as one of the big talking points in the opening weeks of the Premier League season after seamlessly settling into life at Arsenal.

Benali, who is running to every Premier League stadium to raise money for Cancer Research UK, feels Arsene Wenger has landed one of the deals of the summer, hailing the teenager as a fantastic prospect.

“He has a good mindset to progress into a fantastic footballer,” Benali told The Sport Review.

“He is already a good player. He is strong and he can play in a number of positions. He can play at full-back, centre-half or even in midfield.

“He will grow and develop into a fabulous footballer who will be a huge asset to Arsenal. He is a full international. That is a good purchase from Arsenal’s point of view.”

Benali didn’t manage to watch the centre-half’s 10-minute England cameo against Norway as the former Southampton captain continues to rack up over 40 miles per day and edges towards the London leg of his challenge.

But the former Saints full-back, who has already raised nearly £60,000 for charity, isn’t surprised by Chambers’s sharp rise at club and international level.

“I’m not surprised,” he continued. “If any manager has faith in a player and believes he can play at that level, it is sometimes the case of sink or swim.

“He is a fantastic footballer and he has risen to the challenge of playing at that level of football. Otherwise Arsenal wouldn’t have spent the money and he wouldn’t be selected for the team.”

Chambers was one of five big names to leave St Mary’s this summer after Rickie Lambert, Adam Lallana and Dejan Lovren moved to Liverpool and 18-year-old left-back Luke Shaw sealed a £27m switch to Manchester United.

But Benali reckons Chambers could be the most significant departure out of Southampton this summer.

“I know Rickie and Adam. I’m especially pleased for Rickie getting the move he did, going back to Liverpool. That is just a dream for him,” Benali continued.

“From a Southampton perspective, of the players that have left over the summer, Calum Chambers could be – not the biggest loss – but he could go on to be a fantastic player.”

Rooney, Neville and more: Twitter reacts as England down Switzerland