There have been a lot of single-handed backhands to admire on the men’s honours board this season, writes Marianne Bevis 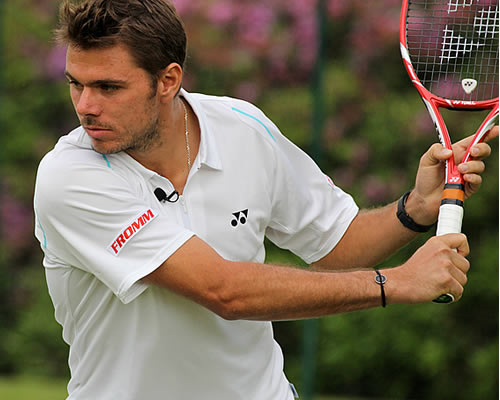 Stanislas Wawrinka is playing some of his most confident tennis Photo: Marianne Bevis

For a shot that is, time and again, dismissed as a dying art, there have been an awful lot of single-handed backhands to admire on the men’s honours board this season.

The first week of January celebrated a Richard Gasquet title in Doha and then a month later in Montpellier. He was outside the top 20 a year ago but is now at No9 for the first time in five years. His right-arm sweep is high, whipped, and disguised by the softest of hands.

On the clay of South America in February, a resurgent Tommy Robredo, back from surgery, reached the semis in Buenos Aires and then, with the switch to the European clay season, won the title in Casablanca and reached the quarters in Barcelona.

He beat younger, bigger, higher-ranked men along the way—Grigor Dimitrov, Tomas Berdych, Benoit Paire among them. A year ago he was ranked 471 and now, age 31, Robredo is up to 36, and all with an old-fashioned, classically-executed, stylish single-hander.

Fellow Spaniard Nicolas Almagro has persisted among the top dozen for two years, reached his first Australian Open quarter-final in January and, come the clay, reached the finals of Houston and Barcelona and the semis in Buenos Aires and Casablanca.

Twice it took Rafael Nadal to stop him, but Almagro has continued to buck the Spanish trend not just by topping the tour’s ace count but in his powerhouse, straight-armed, backhand delivery—nothing fancy, just effortless strength. 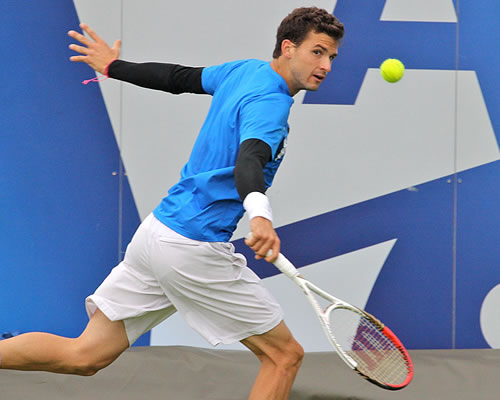 Among the rising stars, it is the charismatic Dimitrov who carries the one-handed banner—and with one of the most flamboyant of actions. His shoulders and long arms fold back like eagle wings, his hands almost touching behind his head. What he sacrifices in accuracy he gains in variety—of spin and angle and disguise.

At 21, the youngest man in the top 50, Dimitrov’s creative shot-making has already taken him to No28 on the back of a first ATP final in Brisbane and his first Masters quarter-final in Monte Carlo—where he took Nadal to three sets.

So this “dying art”, this most elegant of tennis shots promises to have real prominence as the clay season crescendos to its climax at the French Open. Gasquet and Almagro will be among the top 16 seeds, Dimitrov, and very likely Robredo too, will make the 32-man cut off.

Another, Mikhail Youzhny, should squeeze out a seeding, too, and of course at the other end of the seedings is the one-handed backhand’s most famous son, Roger Federer—owner of a drop-dead gorgeous shot of almost infinite variety and never-failing grace.

The price of it has, at times, been high—notably against his infamous foe and owner of the highest kicking topspin in tennis. Nadal learned early the impact of firing his left-handed serve and forehand high and wide above Federer’s left shoulder.

But never has Federer wavered from the shot that his idols—Pete Sampras, Boris Becker, Stefan Edberg—played to such great effect, and he more than most has taken advantage of the versatility and forward momentum that this backhand can produce.

Across the entire tour, the single-hander is a weapon of defence, and few of the top players are without an angled slice to defuse an attack, to buy time, draw an opponent into the net for a winning passing shot. But few of them have also cultivated the range of attacking opportunities offered by the one-handed volley, or from the angled winner taken at shoulder height inside the baseline.

This weekend, though, boasted no fewer than three more iterations of this beautiful shot among the four semi-finalists in two tournaments, and all three of these, too, will be seeds at Roland Garros. 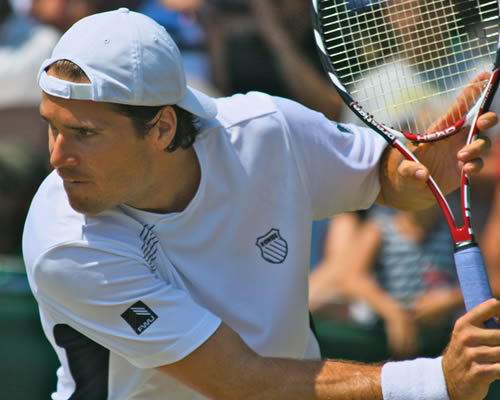 The 35-year-old Tommy Haas won his 14th title in Munich after beating fellow German and No22, Philipp Kohlschreiber. Both are elegance personified on the backhand wing, sliding their right leading leg into the low, balanced stance of the one-hander, before unfolding arm, shoulders and torso through the ball as the left arm rises in counterbalance.

The story of Haas is, in any case, an inspiring one: his comeback from accidents, injuries and repeated surgery having outshone most of his contemporaries 11 years ago to reach No2.

He began 2012 outside the top 200 but started 2013 at 22, having beaten long-standing friend Federer on Halle’s grass and reaching two more finals.

This year, he made the final in San Jose, the semis in Delray Beach and the Miami Masters—taking the scalp of Novak Djokovic and Gilles Simon in he process—and now finds himself in the “quarter of death” in Madrid. He is scheduled to face Robredo in the second round, world No4 David Ferrer in the third and Almagro or Nadal in the quarters.

Even with his all-court skills and one of the fastest, flattest down-the-line backhands, that is a tall order. As he said after Munich: “To have done that, this late in my career, is a big highlight for me. Every time you win a title, it’s a reflection of putting everything together the whole week. It doesn’t happen that often.”

But as long as he continues to wield a racket, Haas will draw fans enthused not just by his back-story, his durability, or the daughter who seems to have stimulated this late-career flourish. Many simply gravitate to the elegant patter and slide of his feet, the turn of his shoulders, the release of that whip of a right-arm into the attitude of an Acosta, and the forward pace and movement that seem to follow.

While Haas was winning in Munich, Stanislas Wawrinka was doing just the same at the Portugal Open, beating no less than world No4 Ferrer.

For Switzerland, against the odds, has produced not just one master of the single-hander but, in the same era, on the same tennis stage, two of them.

Wawrinka has enjoyed top-eight status though dropped to 29 a year ago. With his victory this weekend, he is back to 15 and playing some of his most aggressive and confident tennis in many a year—another family man seemingly rejuvenated.

His aggressive tennis is expressed most fully in his backhand, perhaps the most complete, most impressive single-hander on the tour.

He serves big, he strikes hard on all fronts, but it is when stepping into a big backhand that he looks his best. A big man, with big shoulders and chest, it is perhaps little wonder he can penetrate both down the line and across court with such ease.

Exhibit No1 was his demolition of Andy Murray in the Monte Carlo Masters; exhibit No2, his close-to-victory three-setter against Federer at Indian Wells; exhibit No3, a superb display of all-court placement, spin, pace and angle before finally losing to Djokovic 10-12 in the fifth at the Australian Open.

As luck would have it, he is lined up to meet Djokovic again in the third round of Madrid, though with a title run in Portugal and an additional match over the top seed in Madrid, he will need every ounce of confidence that shone through these quietly spoken words:

“It is going to be tough to return to the top 10, but I am definitely playing better than last year and I am improving. Today, I got the confidence that I can beat a top-four player in a final, on a clay court.”

Wawrinka may not be the most light-footed man on a tennis court, nor have the biggest forehand or finest touch around the net, nor even own the most aesthetically graceful backhand. But when this man’s single-hander is on song, it can open up the court like no other. It becomes, quite simply, a thing of beauty.