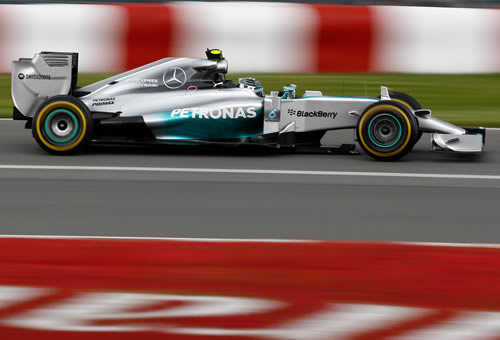 Nico Rosberg could not hide his delight after beating his Mercedes team-mate Lewis Hamilton to pole position for Sunday’s Canadian Grand Prix.

The German was faster by just 0.079 seconds, with Red Bull’s Sebastian Vettel taking third ahead of Williams duo Valtteri Bottas and Felipe Massa.

“I know it’s a track where Lewis is really strong,” said Rosberg. “I’m very happy it worked out.

Nico did a fantastic job so congratulations to him

“It has been a fantastic day and through the weekend we have been progressing all the time and I’m in the best position for tomorrow.

“I’m just working at it all the time, looking at the data, working with engineers and trying to understand areas where I can do better. It’s just a process and I’m glad it’s worked out.”

Hamilton, who trails Rosberg by four points in the drivers’ standings heading into this weekend’s race, praised his team-mate for his performance in Montreal.

“But it’s a great to get a one-two for the team and a fantastic performance. Let’s hope we can make history tomorrow.”

Defending world champion Vettel added: “There are four or five cars within about five or six hundredths of each other – the Williams are really quick here.

“It’s a long race so the strategy could be a bit of a surprise. Williams have a very quick car down the straight.”