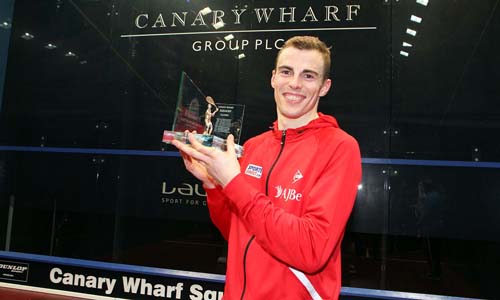 Floating like a butterfly, stinging like a bee, he beat his long-time Yorkshire rival 11-5, 11-5, 11-5 in 51 thrilling minutes, winning the tournament without having dropped a game.

I was aware before the game that James had four [Canary Wharf titles] and I had three. So we’ll have a decider next year and then we can both hang up our rackets together

The Sheffield player and current World Champion said it was the best he has moved all year, and his intensity showed as Willstrop, uncharacteristically, made several errors, including five tins in the first game – no doubt acutely aware just how good his trademark drops needed to be to do any damage.

Matthew was very humble in victory – a sign that, although the pair have certainly had their differences, there has nearly always been a healthy mutual respect underpinning their rivalry.

And maybe – whisper it – something which could even be described as a ‘friendship’ might be developing between them, arguably through new perspective brought about by fatherhood (soon to come for Matthew) and more years as professionals (Willstrop is 30 and Matthew 33, not that either is fading).

Matthew even gave a tongue-in-cheek vision about the pair playing their last respective games here and walking off into the proverbial sunset.

“I was aware before the game that James had four [Canary Wharf titles] and I had three. So we’ll have a decider next year and then we can both hang up our rackets together,” he joked.

“Me and James both got through to this final fresh and it was one of the first times I was ready to start strong because I knew he was on great form.

“And maybe that worked in my favour that he’d not quite been pushed, because he’s sometimes more dangerous when he’s had a four-setter, because then he gets more time to practise those backhand drops.

“I got my tactics right this time but he’ll get his right next time and it could be his turn.

“James, we’ll have some more battles, there’s no doubt about that, I can’t play like that every time.”

Matthew raced to a 6-1 lead in the first, on the back of a good drive, a few textbook volley interceptions and Willstrop putting the ball out on the side-wall twice.

Willstrop dug deep to get the score back to 7-4, but then hit three tins and Matthew took the first game.

The second game started in and odd fashion. After an early point Willstrop complained to the referee about noise in the crowd during points, then, at 3-1 to Matthew, just stopped playing a comfortable shot mid-rally.

He complained to the officials about “intermittent noise” in the crowd and Matthew countered that it was not a let because the rules had been changed on this two years ago and because it was the same for both players.

The referee gave a let, yet Willstrop, one of the most sporting players on the Tour, sternly said it’s not a let and handed the ball to Matthew, leading to a few bemused faces and comments in the crowd.

Afterwards, Matthew said: “Me and James differ slightly on the noise level, it’s the more the better for me and James prefers less. I see his point, though. It’s not like us to have different opinions…”

And in his interview, Willstrop replied: “I just want to correct Nick – it’s not the noise I have an issue with, it’s the sort of…intermittent thing.

“I love the noise. The best venues, like Canary Wharf, like the Tournament of Champions, have brilliant atmospheres and people getting involved. So just putting you right there, Nick.”

Looking at the scoreline it might seem this incident played on Willstrop’s mind, as Matthew went on to build a commanding 7-1 lead in the second. But in reality Matthew’s play was just too strong.

Willstrop did make three bad errors, by his standards at least, on drop shots after he’d pulled back a couple of points to 7-3, but Matthew’s incredible court coverage was forcing him to play at ever smaller percentages. Several times he developed the rally perfectly and just missed the winning shot.

I don’t know if it looks like it off court, but I really gave it everything tonight

The crowd, obviously wanting to see the game to go a fourth or even fifth game, gave probably its loudest cheer after seeing him save two gameballs, but Matthew took the game, again 11-5.

At the start of the third it seemed it might indeed go to a fourth, as the two were neck-and-neck up to 4-4, but from here Matthew pulled away, and Willstrop only got one more point, at matchball.

Willstrop was just as humble in defeat.

He said: “Congratulations to Nick. I just have to take by hat off to him.

“I don’t know if it looks like it off court, but I really gave it everything tonight. I feel spent and I’ve tried my best, but Nick is on top form, he’s had a great year.

“I can’t really say anything more – he’s given me a bit of a trouncing.”

“So I have a lot to learn and many congratulations to him. And thanks to the crowd – I know it wasn’t a great final, but I hope there was some decent rallies.”

The crowd applauded this in agreement, and there was more home success for them to cheer in the form of new World Champion Laura Massaro, who was interviewed before watching the match.

The male-only Canary Wharf Squash Classic is one tier off being a premier event in the squash calendar and so, due to its location, does attract a disproportionate number of English players. But England is still very represented in squash at the moment, having four men in the PSA top 10 and three women in the WSA top 10.

And Massaro’s success means England now boasts World Champions in both the men’s and women’s game – something Matthew, who shares coach David Pearson with Massaro, is very happy about.

“I’m so proud of Laura,” he said. “I said to her she was going to inspire me this week so when you say something like that you have to back it up.”

Matthew certainly did that.