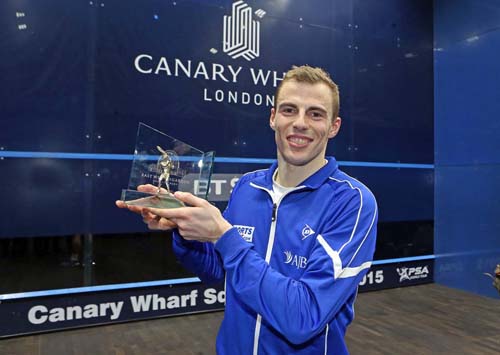 The scoreline might suggest it was a pretty routine win against a lower-ranked opponent – it was anything but.

Rosner brought his a-game, which had already seen him beat James Willstrop and Peter Barker this week, but Matthew had an answer for everything the German “treechopper” could throw at him.

At times, it was like watching a prize fighter take punch after punch on the ropes and not only recover but have enough composure to land several haymakers of his own.

Not to say Matthew was merely counter-punching. In the crucial second game, he struck seven winners and just one error – something Rosner credited afterwards.

Matthew said: “I’ve enjoyed this tonight. It’s amazing to win this title for the fifth time.”

“It’s a great venue. This is where you want to be playing squash.

“I had one of those moments here two years ago where I was looking around wondering why I wasn’t enjoying it. Because I was thinking you should be enjoying it.

“That makes you appreciate it even more. It was just brilliant.

“I feel a bit guilty because two years in a row I’ve been the only person in the building that doesn’t want it to go to a five-game match. So apologies for that.”

The Wolf flew out of the blocks, to such an extent that when he made his first error, at 7-1 up there was an audible note of alarm in the crowd, as if god farted.

He drew gasps from the crowd with some gut-ripping retrievals. After losing one such point Rosner, who displayed great movement of his own, was looking to the heavens, presumably thinking what must I do to beat this man?

Matthew took the first 11-4 and went three points up in the second. Rosner fought back with some ferocious hitting, but the Yorkshireman dealt with the onslaught and took it 11-9.

Then the intensity increased yet another level at the beginning of the third, with the rallies drawing several “oohs” and “aahs” from the packed-house crowd, before Matthew pulled away at 4-4 to make it 9-5.

Rosner pulled it back a bit, to the delight of the crowd who wanted to see the game go to the fourth. However, as a gracious Rosner admitted, Matthew was “just too good on the day”, sealing the win 11-7.