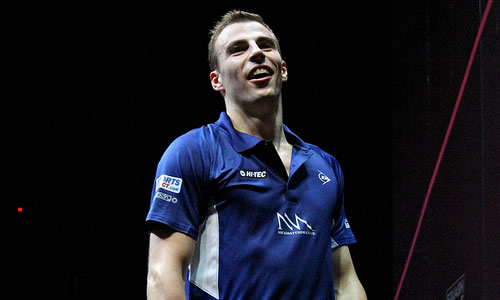 Former world number one Peter Nicol says he is anticipating a couple of tight, exciting matches in the semi-finals of the Canary Wharf Squash Classic on Thursday evening.

The Scot – who now helps to organise the tournament, along with much else in the squash world – spoke to exclusively to The Sport Review after four great games of squash in Wednesday night’s quarter-finals.

“It will be two very close matches,” he said before James Wilstrop faces Mohamed El Shorbagy and Nick Matthew takes on Peter Barker.

“I think I’ll sit on the fence, because, as has been mentioned by a few players, it’s the last major event for a while, so they’re all going to give it as much as they’ve got.

“There’s nothing which is going to be left out there, which means it will be really tough. Obviously there are favourites, but anyone can beat anyone.”

He was also enthusiastic about the tournament in general, praising the all-round quality of the play and the atmosphere.

“And we’re really delighted as organisers by the level of the commitment and support from the squash community, not just in London but the UK; people coming from all over to watch it.

“The event is now a staple on the London sports scene and, to date, it’s been the most successful Canary Wharf Classic, I think, which is great because it’s our tenth anniversary.”

And he added that the tournament’s success should have a positive effect on the sport’s profile, and possibly help the Olympic bid’s chances.

“This type of event undoubtedly helps with the profile of the sport, and therefore the Olympic bid,” he said.