Carl Jenkinson: Per Mertesacker is a top leader for Arsenal 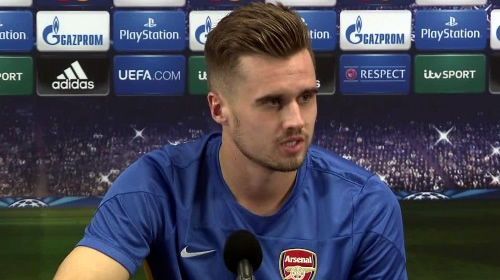 Carl Jenkinson has been full of praise for Per Mertesacker Photo: Screengrab

Carl Jenkinson has hailed Per Mertesacker’s good leadership qualities at Arsenal following his stint as captain.

The Germany international has taken the armband in recent games in the absence of the injured Thomas Vermaelen and Mikel Arteta.

And Jenkinson has been impressed by the 28-year-old’s displays for the Gunners since being handed the captaincy by Arsene Wenger.

“Per’s been here a while now and is very comfortable with his surroundings, he’s playing well at the moment and proving a good leader,” Jenkinson said.

“It’s important that the whole back four is talking to one another – if I’d had one criticism in the past it’s that we haven’t talked enough when doing so makes everything so much easier for everyone on the pitch.

“Per has taken everything on board and is doing a lot of organising out there. It’s something we all need to do if we are to push on and keep things tight as a defensive unit. Bacary [Sagna] has played there and he has proved he is exceptional so it’s not an issue.”