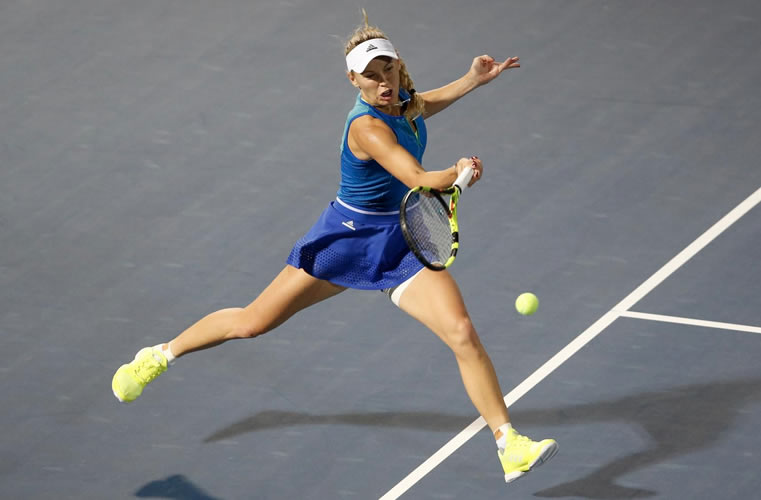 The number 50 was writ large across the final Sunday at the WTA Finals in Singapore as the two most prolific champions among the elite eight prepared to battle for the prestigious Billie Jean King Trophy.

Venus Williams, playing the kind of inspired power tennis that took her to No1 more than 15 years ago, was aiming to win her 50th career title at the age of 37.

Caroline Wozniacki, who reached No1 at the age of 20, exactly seven years ago, was about to contest her 50th career final.

But that was not the only big number on show as the WTA Finals headed to the finale. Wozniacki was targeting a 60th match-win for the season, more than any other woman, and led the field in hard-court wins with 40. She had also accumulated the most wins over top-10 players—which would rise to 14 with the title.

She was, though, up against the only woman this year to reach two Major finals. Williams lost out to sister Serena in Australia and to Garbine Muguruza at Wimbledon. Wozniacki had only ever reached two Major finals, the last one over three years ago.

But there was also no escaping another big number on this final day in Singapore: Williams’ age. Because at 37, she had become the oldest qualifier aside from two very significant others. Billie Jean King, whose name graces the trophy, was 39 when she qualified in 1983. Martina Navratilova, whose name is on the doubles trophy, was 38 when she qualified in 1994. More significant still: the latter was also the oldest finalist, aged 36, in 1992—until Williams.

But to this match in 2017. Williams and Wozniacki began the tournament head and shoulders above their fellow contestants in achievements, 20 matches apiece, with 14 and 12 match-wins respectively. The veteran American won the title in 2008 and was a finalist again the following year; The Dane was runner-up in 2010.

And the two women knew each other very well away from the tennis court, but considering the hard yards that each had put in through so many years on the tour, they had played one another only seven times before.

Ominously for Wozniacki, she had managed to win not a match, and only one set, from Williams. But ominously for the American, she had been forced to play much more to reach the final than her opponent—28 more games, almost two and a half hours longer.

Her marathon three-hour-plus win over Jelena Ostapenko in the round-robin phase comprised more games than any match ever played at the tournament. Her comeback semi against Caroline Garcia lasted two and a half hours. So it was a huge ask of the woman who looked down and out in 2011 when diagnosed with Sjögren’s Syndrome, especially against perhaps the fittest woman on the tour, Wozniacki.

And difference showed early, as Wozniacki broke in the fourth game, 3-1, by using the aggressive tactics that had made her such a resilient competitor throughout the week—two backhand winners.

But Williams, as she had done so often to get to this final, countered immediately, rushed to the net, and volleyed to break back. The two stayed on level peggings until the eighth game, another break for the Dane—only to be broken back again, this time with a Williams backhand pass.

It would be for nought. Williams continued to struggle to hold her own serve, and Wozniacki broke to take the set, 6-4.

Now the momentum and energy of the Dane combined with draining rallies that undermined Williams stamina brought a wave of dominance for Wozniacki. Twice she broke, and held to take a 5-0 lead before Williams held her own serve, but the fighting spirit of Williams buoyed her to a spirited come-back that had the crowd on its feet. She got both breaks back, only to be downed on her own serve, 6-4, after an hour and a half.

Wozniacki jumped for joy: This was, indeed, the biggest title of her career, in what had become a frustrating year of just one title from seven finals. Her second title from her eighth final, then, will be one to remember, not least because it also marked her first win over Williams at her eighth attempt. No wonder she admitted afterwards:

“Eight is my lucky number.

“I was hoping that if I’m going to beat her, at least once in my career, it has to be today. I just went out there and did my best.”

She certainly did that, matching her famed defensive skills with more-than-usual attack, and it earned her 19 winners for only eight unforced errors. Indeed so improved has been her serve that she ended the tournament as aces leader, with 21.

She told BT Sport: “It feels amazing. I can’t believe I am here as the winner. Venus is a great champion and she made it very, very difficult for me. This is my biggest title to date.”

She will enjoy another rather smaller number come Monday: the No3 ranking for the first time in almost six years.

But for Williams, too, this has been a remarkable year. Before the Australian Open, she was ranked 17. She is now back at No5.