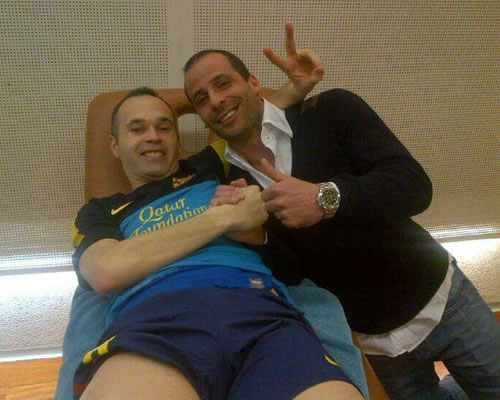 Pedro fired Barcelona into the Champions League semi-finals after a tense 1-1 draw with Paris Saint-Germain at the Camp Nou.

The Spaniard’s strike cancelled out Javier Pastore’s 50th-minute opener and helped Barça progress on away goals, while Bayern Munich were comfortable 4-0 aggregate winners against Juventus.

Here is the best of the Twitter reaction from the professionals in chronological order after the semi-final line-up was concluded.

Arsenal striker Lukas Podolski (‏@Podolski10) is looking forward to a night of European football – unfortunately not with the Gunners: “Just at home watching #ChampionsLeague have a good evening!”

Ex-Bayern midfielder Dietmar Hamann ‏(@DietmarHamann) is surprised by how cynical his former team have been: “Half the Munich team could have been booked by now …Referee is doing well for them!”

Ex-Norwich City striker Darren Huckerby ‏(@hucks6dh65) chimes in: “Time to get Messi on, sure he’s not even warmed up! #BarcavPSG”

England legend Gary Lineker ‏(@GaryLineker) says great players are noticed even more when absent: “Great players are often more noticed when they are absent. I suspect the absence will not last much longer. #messi”

Aston Villa midfielder Andreas Weimann (‏@andiweimann) can’t see Barcelona waiting much longer before introducing Messi: “Odds on Messi coming on and scoring the goal to take them through?”

Striker Demba Ba ‏(@dembabafoot) says PSG weren’t quite able to do a Chelsea: “Paris can be proud. Unfortunately they couldn’t do what the Blues did to them last year !!!!”

Ajax forward Ryan Babel ‏(@RyanBabel) hasn’t seen Barça work that hard in a while: “The game was exciting, Barça really had to work for victory….”

Barcelona midfielder Cesc Fàbregas (@cesc4official) is thrilled to reach the last four: “Semi-finals achieved! We suffered but we got it! #forçabarça #championsleague”

His team-mate Andres Iniesta is equally happy: “Great team and fans! We are in the semi-finals, what happiness! I leave a picture with a very special visitor (Ludovic Giuly)…!