Andreas Christensen is on the verge of signing a new contract with Chelsea FC, according to Italian journalist Fabrizio Romano.

The Danish defender’s situation has become a talking point lately due to the fact that the clock is ticking down on his current deal at Stamford Bridge ahead of its expiry at the end of this season.

Christensen has been a regular fixture in the Chelsea FC starting line-up this season, with the 25-year-old having started five of the Blues seven Premier League games under Thomas Tuchel.

The centre-half had fallen out of favour under Frank Lampard but he returned to the fore following Tuchel’s appointment as the club’s new manager back in January.

It now appears that the Denmark international is close to committing his long-term future to the south west London side as the Blues look to secure his services for the long term.

Respected Italian reporter Romano took to social media earlier this week to reveal that the defender is expected to pen a new contract with the Blues shortly.

Posting on Twitter, Romano wrote: “Chelsea have an agreement in place with Andreas Christensen to extend his contract. Matter of time to sign paperworks, after final clauses to be fixed.

“Two clubs showed interest in Christensen in the last weeks – but no chance for talks as he’s set to sign the new deal.” 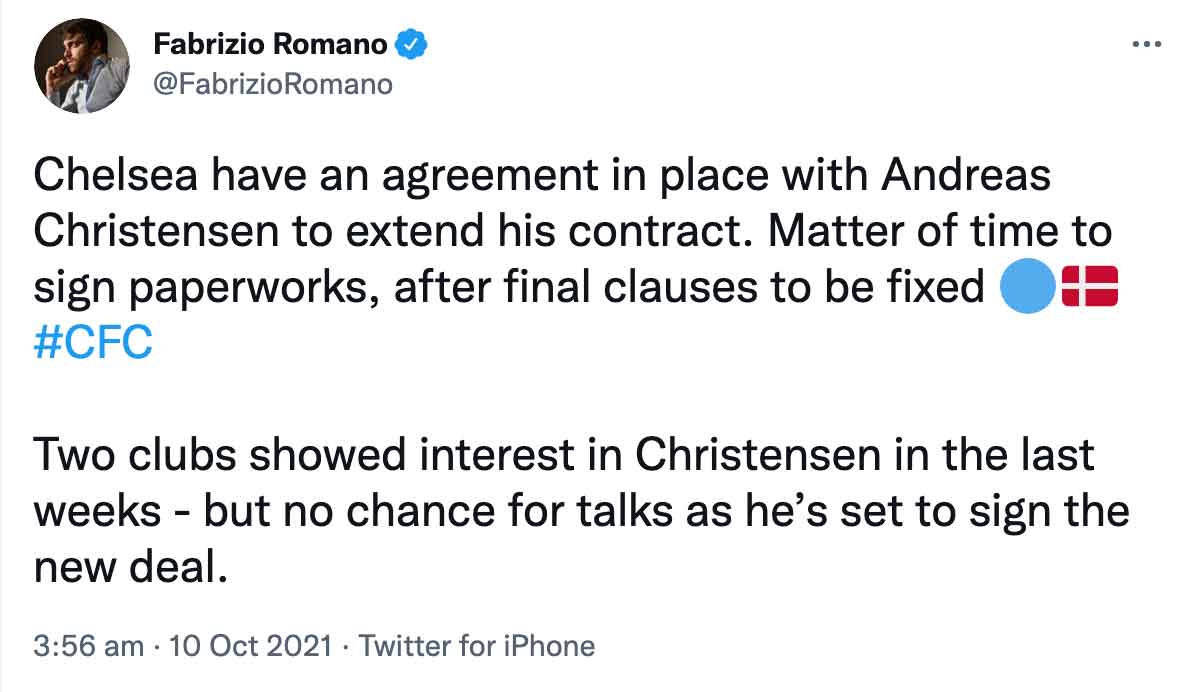 Christensen has made eight appearances for the Blues in all competitions this season and will be hoping to start when the Champions League holders travel to Brentford on Saturday night.

Earlier this month, Christensen dropped a major hint that he would be signing a new contract with the Blues in the near future.

“It’s hard to say how things will end up,” he said. “There is a lot of talk. I will not say too much, but I think it looks good. I am happy to be at Chelsea.”

Christensen has made 135 appearances for Chelsea FC since his senior debut for the club in 2014.