Chelsea FC are set to hold further talks with Man City about the transfer of Nathan Ake, says Fabrizio Romano

Chelsea FC are set to hold further talks with Manchester City in the coming days about a deal to sign defender Nathan Ake, according to Italian reporter Fabrizio Romano.

The Blues have been strongly linked with a move for the Netherlands international in recent days as Thomas Tuchel looks to re-strengthen his back-line following the exits of Antonio Rudiger and Andreas Christensen on free transfers.

Manchester City and Chelsea FC have already been in discussions about the transfer of Raheem Sterling to the south west London club, with widespread reports in the British media this weekend claiming that the two sides have now settled on a fee for the England international.

Now, Romano says that the two Premier League clubs will be in contact again as they look to strike a deal for the 27-year-old defender to return to Stamford Bridge.

The Italian journalist also reiterated that Chelsea FC and Ake already have a full agreement on personal terms ahead of the proposed transfer.

Posting on his personal Twitter account, Romano said: “Chelsea and Man City will be in contact again in the coming days to negotiate Nathan Ake deal after Sterling. Man City have been clear with Chelsea: they want almost same fee paid in August 2020, around £41m.

“Ake has full agreement with Chelsea on personal terms.” 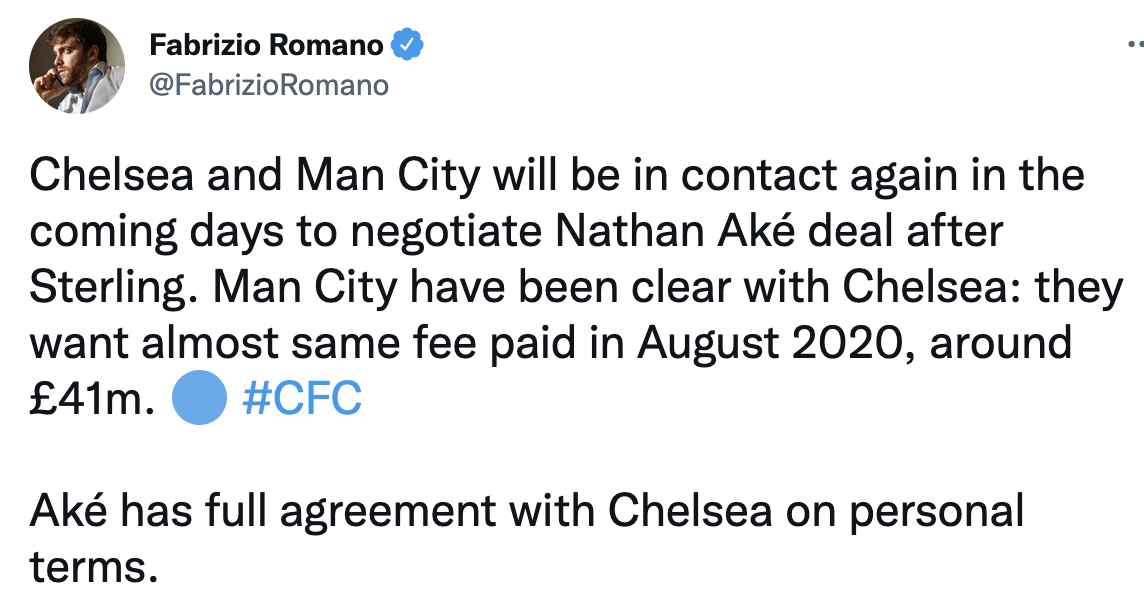 Ake played for Chelsea FC between 2012 and 2017 and spent three seasons at Bournemouth before moving to Manchester City in the summer of 2020 following the Cherries’ relegation to the Championship.

The defender – who has made 17 appearances for the Chelsea FC first team – has scored three goals in 27 games for the Netherlands senior team.

At Manchester City, Ake has won two Premier League titles and the League Cup. In total, he has scored four goals in 40 appearances for Pep Guardiola’s men in all competitions.