Chelsea FC are edging closer to a deal to bring in Christopher Nkunku from RB Leipzig next summer, reports Fabrizio Romano

Chelsea FC are closing in on a deal to sign Christopher Nkunku from RB Leipzig next summer, according to Italian reporter Fabrizio Romano.

Romano took to social media on Monday afternoon to report that the Blues are edging closer to a deal to bring the 25-year-old attacker to Stamford Bridge ahead of next season.

The Italian journalist also claimed that a medical has already taken place and it’s now just a matter of time until the contracts are signed and the deal is confirmed. 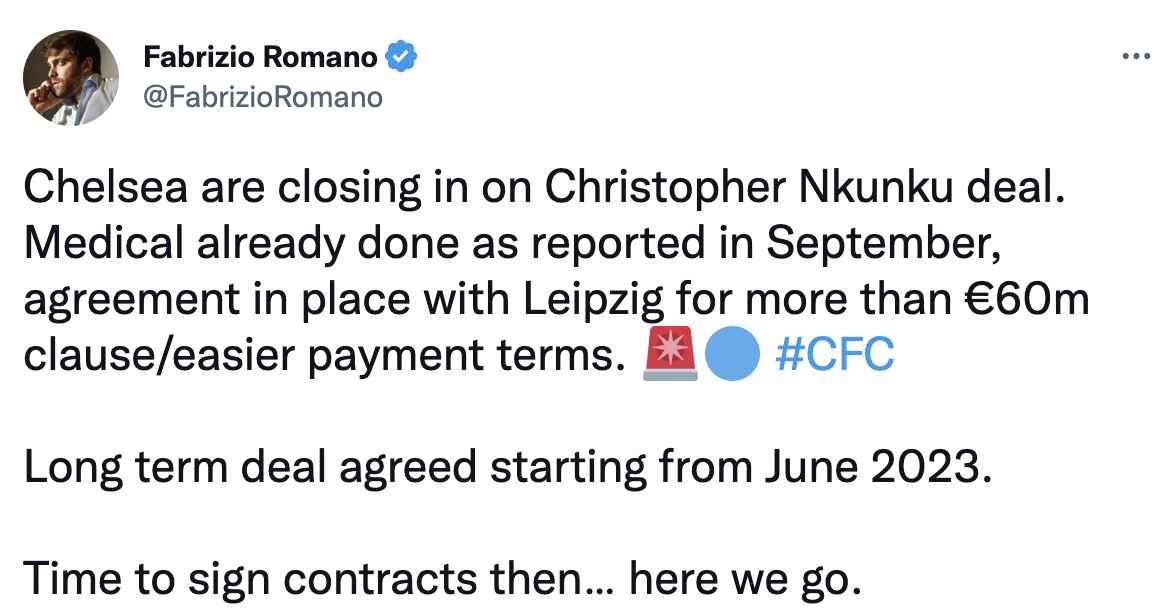 Nkunku has been in eye-catching form for RB Leipzig so far this season, scoring 12 goals in 15 Bundesliga games to help the German side up to third place in the table.

The Lagny-sur-Marne-born player withdrew from France’s World Cup squad before the first fixture of the tournament due to injury.

Meanwhile, one current Chelsea FC player who has been excelling at the 2022 World Cup is Hakim Ziyech. The 29-year-old, who has struggled to produce consistent form for Chelsea FC since his move to south west London from Ajax, has played the full 90 minutes in both of Morocco’s group games so far and was named man of the match thanks to his display as he notched up an assist in their 2-0 win over Belgium on Sunday.

“You know this guy, he is incredible,” Regragui said of Ziyech after the game. “The spirit, when he came back into the national team, it came back. What a lot of people say about him is that he’s a crazy guy, a difficult guy to manage, he can’t help the team.

“But for me what I see is that when you give him love and confidence, he can die for you. And that is what I give him.

Ziyech has only started one Premier League game this season and has only featured in five of the Blues’ 14 top-flight fixtures so far this term.