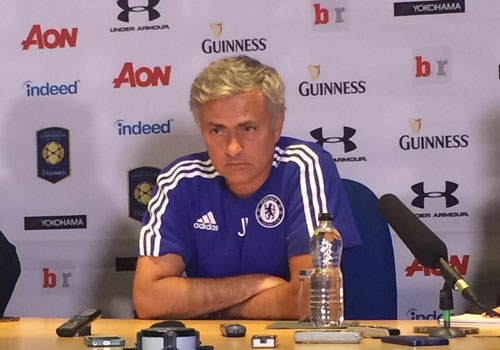 Jose Mourinho says he is happy with Radamel Falcao’s progress since the striker’s loan move to Chelsea.

The 29-year-old started his first game as a Chelsea player at Stamford Bridge on Wednesday night as the Premier League champions lost 1-0 to Serie A side Fiorentina in their final pre-season friendly.

I took him off in his best moment of the game. I am happy with the evolution

But Mourinho, whose side lost 1-0 to Arsenal in the Community Shield at Wembley on Sunday, was pleased with Falcao’s performance against Fiorentina considering the Colombia international’s limited pre-season.

“He is very good for the situation,” Mourinho told his post-match media conference.

“[He had] Copa America, holidays and one week of training – not the three weeks the others had.

“He has had minutes in the different matches. I took him off in his best moment of the game. I am happy with the evolution, very happy to be fair.”

Falcao is one of two summer signings at Stamford Bridge after Mourinho snapped up Asmir Begovic in an £8m deal from Stoke City.

The Colombia striker could start against Swansea City at Liberty Stadium on Saturday after Mourinho confirmed Diego Costa remains an injury doubt.

Thierry Henry: Why Man United can challenge Chelsea for the title