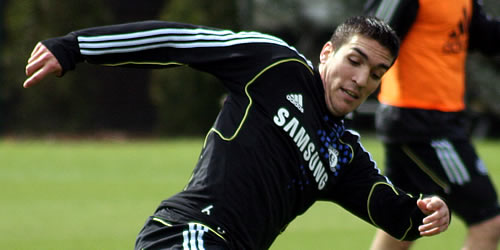 Oriol Romeu admits he would be open to a return to Barcelona this summer should the La Liga giants want to bring him back to Camp Nou.

Barcelona are understood to have a buy-back clause in Romeu’s contract following his move to Stamford Bridge last summer and recent reports have suggested the Spanish club are interested in re-signing the midfielder.

The 20-year-old made 22 appearances for the Blues last term but the Spaniard admits he feels like a Barcelona fan and would find a move back to Barça difficult to resist.

“If [Barcelona head coach] Tito Vilanova wants me there, I would talk to him and discuss it with him. If they want me to enjoy my football and show some confidence in me, then onwards and upwards,” he told Spanish newspaper Sport.

“Returning to Barcelona is an option but it depends on many things, because I want to play. I’ve always felt like a big Barcelona supporter, I am very grateful to FC Barcelona and it’s thanks to them that I am where I am.

“I wanted to play more and Chelsea showed confidence in me, but if FC Barcelona want you to play, well…”

“They have the option to buy me back, I left knowing I had that option, and if they still have confidence in me, as they showed by leaving the option open, then they should let me know.”