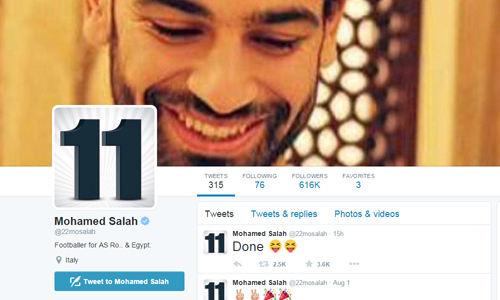 Jose Mourinho admits he has “no idea” what the future holds for Chelsea midfielder Mohamed Salah.

The Egypt international spent the second half of the 2014/15 season on loan at Fiorentina and went on to score a respectable six goals in 16 games in Serie A.

La Viola were reported to be keen to sign the African on a season-long loan for the upcoming campaign, but the 23-year-old midfielder rejected the proposed move.

And Salah appeared to hint at an imminent move to Fiorentina’s Serie A rivals Roma on Twitter after he posted the below tweet and change his bio in the above photograph.

However, when Mourinho was quizzed about Salah’s future after a 1-0 loss to Fiorentina in their final pre-season friendly at Stamford Bridge, the Chelsea manager conceded that he was in the dark on Egyptian’s future.

“I have no idea [about his future],” Mourinho told his post-match media conference.

“I just know that Salah left Chelsea a few months ago to play on loan with Fiorentina.

“I was happy because he was playing every game and that’s the objective of a loan.”

Salah opted to join Chelsea ahead of Liverpool in an £11m deal in January 2014.

The Blues winger has scored just two goals in 19 games in all competitions for the Premier League champions.

Thierry Henry: Why Man United can challenge Chelsea for the title