Barcelona are favourites to beat Chelsea in their semi-final clash, but Harry Kemble looks at why the Blues should be positive 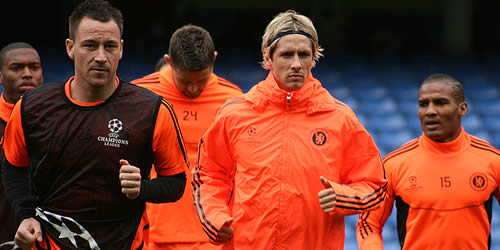 Chelsea have started to show their old class under interim coach Roberto Di Matteo. Since taking over, the former Blues midfielder has guided his side to nine wins out of 12 in all competitions. Along the way he has generated a collective spirit that was rarely seen under former manager Andre Villas-Boas. Chelsea’s gruelling end-of-season run-in of eight games in 27 days, which includes both legs against Barcelona, an FA Cup final and vital league fixtures in their quest for fourth place has led to an understanding for squad rotation amongst the players – something that Villas-Boas failed to instil. Players such as Salomon Kalou, Paulo Ferreira and Florent Malouda have all produced dogged performances when called upon by Di Matteo in recent weeks despite rarely starting under Villas-Boas. One explanation for this transformation is the players who seemed destined for a summer transfer have lost the fear of being axed under Di Matteo, who is only in charge until the end of the season.

The Blues’ record against Barcelona

In 24 knock-out games, Barcelona have won 14 and scored 56 goals. They are nerveless when it comes to the latter rounds of Europe’s premier competition. Yet Chelsea have not been beaten by the Catalans in their last five matches – three of which have come in the Champions league knock-out rounds. The Blues have also never lost at Stamford Bridge at this stage of the competition. The Londoners came agonisingly close to beating arguably the best side in European history when they last met in 2009. Andres Iniesta’s injury-time winner eliminated Chelsea despite Eric Abidal being sent off with over 30 minutes of normal time remaining, and four strong penalty appeals being turned down. After the match, the normally pragmatic Guus Hiddink described referee Tom Henning Ovrebo’s performance as the worst he had ever seen. Chelsea know they will have to be at their best but their emphatic 5-1 victory over Tottenham Hotspur in the FA Cup on Sunday will give them heart going into their sixth Champions League semi-final in the last nine seasons.

Messi has never scored against Chelsea

Lionel Messi had netted 78 times for Barcelona last time the defending champions met Chelsea. His tally is now the highest in the club’s history with 243 goals. Despite notching up 51 goals in his Champions League career, the little master has not scored against Chelsea in six attempts. The Blues can take faith from this statistic as they hope to keep the Argentine at bay with more or less the same team in place from three years ago. Gary Cahill looks set to start alongside captain John Terry in Wednesday’s clash after David Luiz picked up a hamstring injury in the build-up to Spurs’ only goal at Wembley. Despite the enforced change, Cahill will fill the home fans with confidence. Luiz has improved throughout the season, even more so under Di Matteo, but he would still seem a risk against Messi and Barcelona.

Torres has been a potent weapon against Barcelona

After Didier Drogba’s superb strike against Spurs, the Ivory Coast international may start on Wednesday night. However, Fernando Torres has one of the best records against Barcelona in recent years. The 27-year-old has scored seven times in ten games against the Spanish champions. In the 2004-05 and 2005-06 seasons, when Barcelona won La Liga under Frank Rijkaard, the former Liverpool striker proved to be a thorn in Barça’s side. They were beaten at Nou Camp 2-0 and 3-1 by Atletico Madrid in those campaigns and in both matches Torres scored twice.