Chelsea’s Fernando Torres: There’s an overreaction if I make a mistake 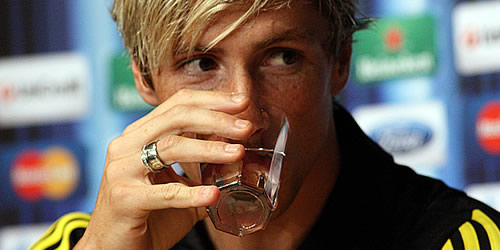 Fernando Torres believes there has been an “overreaction” to his mistakes since moving to Chelsea.

The 29-year-old forward has struggled to recapture his world-class form at the west London side following a club-record £50m move to Chelsea from Liverpool in January 2011.

Torres has managed to net just 15 goals in 87 Premier League appearances for the Blues after netting 65 times in 102 top-flight outings during a three-and-a-half year spell at Anfield.

And the Spain international feels he doesn’t get enough credit for his positive contributions at Stamford Bridge.

“It’s the feeling that I have had from the first day. There has been the situation going on with the club, the way the team are going and then my own way,” Torres is quoted as saying by the London Evening Standard.

“There has been an overreaction about everything. Overreact when I did that miss or if I have a red card or I hit the crossbar instead of scoring a goal.

“They never talk about the good things. More or less from the beginning to this day, it’s been the way I feel.”

Despite expressing his frustration at the criticism since his Stamford Bridge move, Torres accepts he should be performing at a higher level for the west London side.

“The people are looking at me thinking I should do so much better and it’s true,” he continued.

“The reason you pay that money for someone is that he has shown in the past he is worth that.”

He added: “I know I have many things to do at this club to give the confidence back to the owner. The amount of goals I scored last season should be the minimum.”