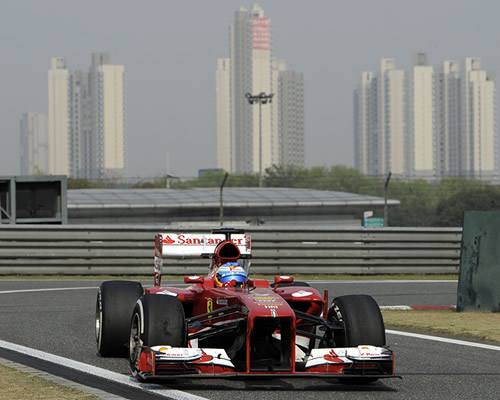 Fernando Alonso staked his claim for the 2013 drivers’ world championship after an imperious drive comfortably won him the Chinese Grand Prix.

The Spaniard finished ahead of Kimi Raikkonen and Lewis Hamilton to get his title charge back on track in Shanghai, while world champion Sebastian Vettel finished fourth.

Hamilton held onto his lead at the start, with both Alonso and Felipe Massa getting ahead of Raikkonen’s Lotus, who started sluggishly in second.

Alonso and Massa both overtook Hamilton on lap five on the pit-straight, utilising their DRS to make a Ferrari one-two.

Both Hamilton and team-mate Nico Rosberg pitted on lap six as Mercedes opted for a risky strategy of pitting at the same time.

Esteban Gutierrez’s Sauber then slammed into Force India’s Adrian Sutil at the end of the first DRS zone, ending both their races.

After the first full-round of stops of those on the soft tyre, Nico Hulkenberg led from Vettel and Jenson Button, who all started on the medium.

Mark Webber collided with Jean-Eric Vergne’s Toro Rosso on lap 15, the Australian damaging his wing and retiring three laps later when his rear tyre came off.

A lap after Webber’s collision, Raikkonen hit the back of Sergio Perez’s McLaren, damaging his wing but overtook the Mexican on lap 17.

On lap 21, Alonso re-took the lead from Button at the long first corner, while Hamilton and Raikkonen pitted simultaneously a lap later.

Rosberg retired – his second of the season – on lap 23, with Button and Alonso switching to fresh medium tyres a lap later.

Raikkonen overtook Button on lap 32 before pitting four laps later, with Vettel then overtaking the Briton on lap 37 to go third.

Following the final round of stops – which involved Button and Vettel going onto the softs – Alonso comfortably brought home his Ferrari for his 31st career victory.

Round four on the calendar is next weekend’s Bahrain Grand Prix, which world champion Vettel won last year.