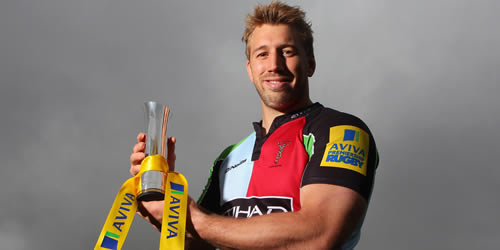 He may have enjoyed a dream season to-date, captaining England and finishing top of the Premiership pile with Harlequins, but for Chris Robshaw the job is only half-done.

The 25-year-old, who saw off competition from the likes of Mike Brown, Brad Barritt and Nick Wood to win the Aviva Premiership player of the season award, led England to second place in the Six Nations in March, while also making 16 appearances for Harlequins.

This weekend Harlequins go head-to-head with Northampton in a winner-takes-all Aviva Premiership semi-final at the Stoop, while Robshaw looks certain to lead England again this summer as Stuart Lancaster’s men head to South Africa.

The carrot of a Twickenham Premiership Final appearance on 26 May beckons for Robshaw, while he will also be aiming to be the first England skipper since Martin Johnson to lead a victorious side in South Africa.

He may have enjoyed the applause of his peers on Tuesday night – but for Robshaw he is desperate to ensure his season finishes with competition silverware – not personal glory.

“If someone had said a year ago that this would be the season I would have had with Quins and England I would probably have laughed at them,” said Robshaw.

“It’s been a tremendous year, to captain the England team was a real honour and to finish top of the pile with Harlequins is great.

“I do look back and reflect on the Six Nations and think ‘that was a great couple of months’ but the club are great at bringing you back down to earth.

“It’s a great achievement but this is when the real hard work starts because we haven’t won anything yet.

“The home semi-final is massive, Saints are a very strong side but with a big Stoop support it should be a cracker.

“It’s a one-off game so the team that turns up on the day and delivers is the better team and we know that.

“We know how the league is, this is how it works and we just need to get on with it now.”

He excelled in the Six Nations, becoming the first England skipper to win three away championship fixtures but it’s South Africa that now dominates his thoughts.

The last time England won in South Africa was in 2000 in Bloemfontein and Robshaw in keen to repeat the trick this summer with his newlook and inexperienced team.

“The step up to going to South Africa is something I’m looking forward to, I’ve never been there and I want to test myself,” said Robshaw.

“But everyone talks about the physicality, it’s a challenge for us as we look to build on our success in the Six Nations, go down there and win the test series.

“South Africa is one of those places that we know is going to be tough, but we want to go there, we don’t want to just be doing it at home, we want to go into teams’ backyards and do it there as well.

“It will be a tough challenge but we want to go there and do that to hopefully put English rugby back in the forefront of people’s minds.”