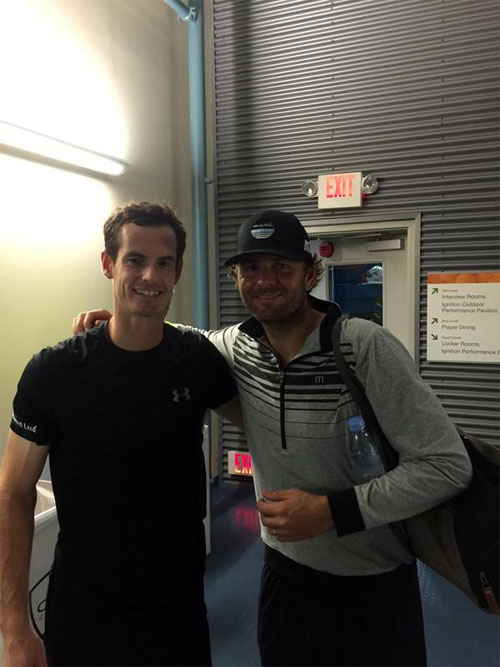 Coming so soon after one of Andy Murray’s most emotional days on the tour this year, his first victory over Novak Djokovic in over two years to win the Montreal Masters—and on the day that his coach Amelie Mauresmo gave birth to her son—the Briton’s opener in Cincinnati was destined to be almost as emotional.

Popular American Mardy Fish was fast approaching the final matches of his career. After years of heath problems, first with a heart condition and then with anxiety and panic attacks, he announced in July that he would conclude his playing career during the US Open Series, ending where he had effectively left off in 2012 at the US Open.

Since pulling out of his scheduled match against Roger Federer in the fourth round in New York that summer, Fish has managed few tournaments, and none outside North America’s hard courts. This year, he played and lost just two—until, with a wild card, he won his opening match this week against Viktor Troicki.

Now he faced world No2 Murray, more in hope than expectation, despite the considerable success Fish had enjoyed in Cincinnati before. Twice he had reached the final, in 2003 and 2010—when he beat Murray in the quarters. He had also reached the semis in 2011, this time beaten by Murray in what would be their last meeting—until now.

And as if the moment, for Fish and the thousands of Americans who cheered on the four-time Masters finalist, was not tense enough, the weather played its own part in the drama.

Murray and Fish were last onto Grandstand Court, but delayed still later by torrential rain and not a little thunder and lightning. It would be 10.30pm before they emerged, with heat and humidity still uncomfortably high. And while Murray has grown used to these playing times and conditions from his run in Montreal, it was surely a challenge of the highest order for Fish who had just three matches in his legs in the last two years.

But 33-year-old would provide a stern test in Ohio’s testing conditions. Fish won the first point, courtesy of a Murray double fault, scored a fine volley winner to go 15-30 up, and a forehand took him to deuce. It was a reminder, if Fish’s win over the in-form Troicki was not enough, that here was a man with a quality game and revelling in his final weeks in the spotlight.

Even more surprising, Fish moved freely and hit confidently to break to love in the third game. But his lack of match-play showed in his see-sawing tennis, and soon Murray was slotting his signature backhand passes through the net-bound Fish.

A break back made it 2-2, and Fish survived break points in the sixth, as well. And with Murray now into his stride—a killer drop shot, a baseline-clipping lob, a forehand running pass—the Briton stepped up to serve for the first set.

But Fish was far from done: he too dropped and lobbed and passed a chasing Murray, all in one break-point rally. Murray, though, broke again to take the opener, 6-4, but this was competitive, long-rally tennis, littered with errors but packed with some fine shot-making too.

The second set was even closer, and again it was Fish who got the first break in the seventh game. Murray looked, at times, leaden-legged but Fish made just enough errors to give Murray some openings and the chance to step in for the winner. Murray levelled at 4-4, only to be broken again for 5-6 by three blistering winners from Fish’s racket. But once more, serving this time for the set, Fish could not hold and they went to a tie-break.

Fish now went for just too much on his forehand to notch up a final tally of 43 errors. The one point he did score in the tie-break was, in fact, another error, but in the end it was not important.

Murray picked up his 54th win of the year, more than any other player, and a third-round contest against Grigor Dimitrov. But it was Fish who walked from the court with a big smile and to cheers from an appreciative crowd.

It is not just home fans, though, who can appreciate a player and a man of Fish’s character.

He came come close to walking from tennis in 2009 after his ranking headed down towards 100, but opted instead for a concerted late-career change in his training regime, diet and ambitions. He later told me in London: “If I was going to go out, I wanted to go out doing some pretty cool things,” and the rewards started to flow in 2011.

After a quarter-final finish at Wimbledon—only the second Grand Slam quarter in his 12 years on the circuit—he reached three straight finals in the US Open series, including the Montreal Masters and the title in Atlanta.

He went on to break the top 10 and qualify for the World Tour Finals for the first time, where he added:
“I’ve seen every one of these on TV. This is the stuff you don’t see—going to the gala last night, gathering memories that I may never have the chance for again. I’m not taking it for granted.”

They are words that, with hindsight, remain poignant. He would lose all three round-robin matches at the O2 but, despite carrying a hamstring injury, he took Rafael Nadal to a third-set tie-breaker and then took Federer to three sets as well. But little did he or anyone else realise he would only play in London once more, the following summer at Wimbledon—his last match outside the USA.

So Fish heads to New York to take his final bow from a career full of unexpected twists and turns.

He told the media ahead of Atlanta: “Obviously, it’s no secret, I’d love to go back to the US Open, where sort of it all came crashing down for me in 2012, and sort of conquer that place. And by ‘conquer,’ I mean just get back out on the court there. I have a lot of demons from that place.”

Fish left Cincinnati for the final time in some style and with considerable credit. One hopes it will be the same on his very last day on the tour for modest Mardy.