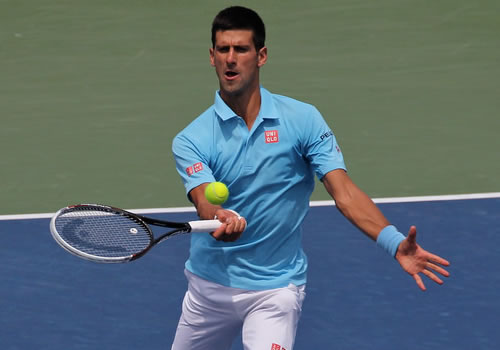 The draw for the Cincinnati Masters may be missing its defending champion in an injured Rafael Nadal, along with Juan Martin del Potro, Kei Nishikori and Richard Gasquet, but by the third round, there were no fewer six of the world’s top 10 players in place.

Within those six were four Grand Slam champions. The two in the bottom half, in the shape of Roger Federer and Andy Murray, were set on a quarter-final collision course should they come through their next matches.

The two in the top half, Novak Djokovic and Stan Wawrinka, were reigning Grand Slam champions: Djokovic at Wimbledon and Wawrinka in Australia. And these two could also boast 2014 Masters titles. The Swiss No3 seed claimed his first Masters crown in Monte Carlo, but Djokovic, the world No1, was unquestionably the Master of the last 12 months. Dating back to Shanghai last year, he was the reigning champion at five of the ATP jewels—including three this year.

What’s more, the Serb remained the only man on the tour to have won eight of the nine ‘big ones’ and he had come desperately close to becoming the first man to complete the set in Cincinnati: Four times he had reached the final, four times fallen short.

Now, with Nadal absent and the only two Cincinnati champions in the draw, Federer and Murray, in the bottom half, this seemed his best chance to claim his 20th Masters and, with it, the unique Career Golden Masters.

And with respect to the elegant, slender Spaniard, Tommy Robredo, Djokovic was expected to advance to the bigger challenge of Robredo’s compatriot, fellow 32-year-old David Ferrer, in the quarters. Robredo had only beaten Djokovic once before and that was back in 2005, when the classy Spaniard rose to the top five and became a constant presence in the top 10 for two years. In 2008, Robredo also forced Djokovic to five sets at the US Open, but the Serb had beaten him convincingly in Miami only this year.

But the character and quality of Robredo saw him return from leg surgery and a ranking of 266 in 2012 to reach his current No20—and many would recall Robredo’s outstanding performance in beating Federer in New York last year for the only time in 12 meetings. Though at his best on clay, the Spaniard is nimble, with stylish groundstrokes and a solid, varied serve. And he proved his worth by taking an early break in the first set against a lack-lustre Djokovic.

The Serb broke back to take it to a tie-break, but Robredo snatched it, with an ace no less, on his fourth set point, 7-6(6).

Not content with that, he opened the second with a love hold, while Djokovic, his head bowed rather than galvanized, hit first a smash than a volley into the net. He held, and they stayed on serve through to 4-4, only for Robredo to land awkwardly and twist his ankle. Would this be Djokovic’s cue to take control?

Far from it. Robredo held to love for 5-4, took a brief medical time out, and earned two match points after Djokovic double faulted. On this occasion, the Serb served himself out of trouble while Robredo tensed up on a couple of forehands, but Djokovic quickly found himself serving to save the set again. This time, he could not resist a third break point, and Robredo took a shock victory, 7-5.

The Spaniard was, naturally, delighted: His comeback to the top level of the game has been hard-earned and well-deserved. But Djokovic looked out of sorts, very much as he had in scattering errors against Jo-Wilfried Tsonga in Toronto last week. One can only think his heart and mind are elsewhere—perhaps with new wife Jelena and their soon-to-be-born first child.

But what of the other Grand Slam and Masters champion in this half? With six wins out of eight meetings over his opponent Marin Cilic, Wawrinka was the favourite to advance, but the Croat has been one of the form men of the year. Indeed he is third on the list for match-wins this season, having made a strong comeback from a difficult 2013.

Though still only 25, Cilic seems to have been around for years, and certainly looked as though he belonged with the big boys when he broke into the top 10 as a 21-year-old. Last year, though, he slipped to 47 when he fell foul of a cold remedy that earned him a brief suspension, only to return to the tour with renewed ambition and a new coach.

Cilic joined forces with fellow Croat and childhood hero, the big-serving Goran Ivanisevic, with the aim of taking himself not just back to his former level but a step higher.

The results of the collaboration showed immediately. In between titles in Zagreb and Delray Beach, Cilic reached the final of Rotterdam with back-to-back top-10 wins over Tsonga and Murray. He reached a career-best quarter-final at Wimbledon, beating Tomas Berdych, before losing to Djokovic in five sets.

Last week, he gave Federer a scare in Toronto in a close three-setter and, now ranked No19, he aimed to go one step further via another Swiss in Cincinnati.

And his quality, his new confidence, and his calm, efficient attacking game were quickly in evidence as he raced to a 3-0 lead.

By mid way through the seventh game, Cilic had dropped only two points on his serve, and sealed the set with easiest of serve-and-volley plays. It took him a mere 24 minutes in which he had made Wawrinka look little more than ordinary. Indeed the Swiss had managed only six winners to Cilic’s 11, and had not earned a single break point.

But if the match looked one-sided in the first set, that was nothing to the reverse that took place in the second. This time it was Wawrinka who rushed to 3-0, but not content with that, Wawrinka broke Cilic twice more.

The problem soon became clear: not just Wawrinka’s rising form but Cilic’s right arm. The Croat tried some physio before the third set, but it was fruitless. He held onto his first serve but that was all. Another half hour and Wawrinka was into the quarter-finals, 6-1.

There the Swiss will meet the unexpected face of veteran Frenchman, Julien Benneteau. The unseeded 32-year-old matched his Toronto upset over Ernests Gulbis with victory over the huge Pole, Jerzy Janowicz, 7-5, 6-1.

Just one place remains in the top half of the draw: Will it be filled by Ferrer or a third single-hander, Mikhail Youzhny? Either way, things have begun to look very promising for Wawrinka, but rather less so for Djokovic, who summed up his feelings after the match: “Just many, many, many things are not clicking these two weeks on hard courts.

“It’s unfortunate, but it’s more than obvious I’m not playing even close to what I’m supposed to play. I have to keep on working and trying to get better for US Open.”

The final Grand Slam of the year begins on 25 August in New York.