For the second week in a row, the second Masters in a row, two of the most talented but bedevilled players met in the first round 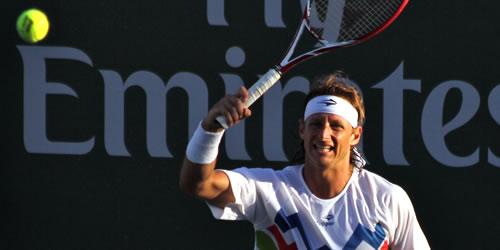 It’s the last Masters of the US Open Series—Cincinnati—but it will be the first time that the big guns of men’s tennis have faced one another since the Olympics.

Novak Djokovic was the only top-five player and the only semi-finalist from London 2012 to make hay in Toronto while the others retired or rested.

Now, though, he must return to the well for another gulp of sustenance as all but Nadal line up to earn points and momentum on the North American hard courts for the first and last time before the US Open.

And there is much to win and to lose, even without the need to lay down a marker for the last Grand Slam of the year.

Djokovic could take back the No1 ranking if he converts last year’s runner-up finish into the title—unless Federer makes a strong run too. And for the former, it would be his first Cincinnati title after three finals. For the latter, it would be a fifth Cincy crown.

Murray, as defending champion, has points to lose but, in one of his favourite swings of the year and buoyed up by his Olympic break-through, he will also be keen to make statement of intent.

But before the drama at the top takes to court, there has been another story to inspire tennis fans far and wide.

For the second week in a row, the second Masters in a row, two of the most talented but bedevilled players of the last decade faced one another in the first round. For Tommy Haas and David Nalbandian, it marked their fifth meeting— their first was in 2002.

Haas, No2 more than 10 years ago, has 13 titles spread across 13 years. A silver medallist in Sydney, his only Masters title came back in 2001 and his last Masters final was in 2002. A further measure of the man lies in his contests with long-standing friend Federer: three of their four Grand Slam matches have gone to the full five-sets.

Nalbandian reached No3 more than six years ago, won the first of 11 titles 10 years back and has reached a final every year since 2001. He, too, lit up tennis early: a Wimbledon finalist at 20, Rogers Cup finalist in 2003, and Madrid and Rome finalist in 2004. He won the Masters Cup in 2005 and then took two Masters titles in 2007 in Paris and Madrid—beating both Federer and Nadal in both.

But he, like Haas, has had a career littered with mishaps—injury and accident, soaring rises and long slides in the rankings. As far back as 2003 and 2004, Nalbandian missed months at a time with abdominal, thigh and wrist injuries. It was the same in the spring of 2006 before a resurgent 2007. Much of 2009 and 2010 were missed after hip surgery, he returned strongly, but had more injuries—groin and hamstring—through 2011.

But Nalbandian’s misfortunes are put in the shade by those of Haas. The German broke one ankle just as he made the transition from junior to senior status, then within a year he broke his other ankle. Despite a bulging disc in his back in the run-up to the Sydney Olympics, he won silver medal and was soon second in the world.

That success was brought to an abrupt halt when an accident almost claimed the lives of his parents, and left his father in a coma. Haas would spend much of 2002 taking care of his family, and went on to miss most of 2003 when a serious shoulder injury required surgery. 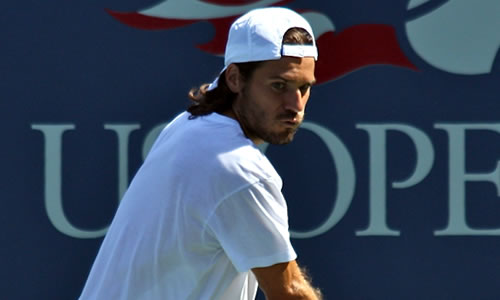 In 2004, he made a surge from outside the top 1,000 to No17, earning the ATP Comeback Player of the Year award. But in 2005, he suffered a twisted ankle in the first round of Wimbledon, a wrist injury in 2006, more shoulder surgery in 2007 and torn stomach muscles during Wimbledon 2008. And still he was not done: Haas played only two months of 2010 before hip surgery, and then had elbow surgery, too.

But despite rejoining the tour last summer ranked 896 and starting 2012 at 205, his passion for the game—now enhanced further by a wife and baby—has again infused him with a will to win.

Ranked too low to qualify for the Olympics, he went on a two-month spree, first beating Federer to take the title on Halle’s grass, then reaching the final on the clay of the Hamburg 500. He did the same on the hard courts of the Washington 500 and reached the quarters last week in Toronto—the only man to push Djokovic to three sets.

Now at No23, one match-win in Cincinnati would take him past Fernando Verdasco and one step closer to the top 20.

Haas’s opponent, though, also knows how to make a comeback. Nalbandian thrilled his fans through the spring, first with a semi finish on the clay of Buenos Aires and then a quarterfinal run at Indian Wells where he beat Marin Cilic, Janko Tipsarevic and Jo-Wilfried Tsonga before pushing Nadal to three tough sets. Indeed, Nalbandian has taken a set from Nadal in all three of their hard-court Masters meetings.

He would probably have climbed even higher than his current No39 had he not seen the red mist at Queens and been defaulted in the final. After that, however, he lost three straight first-found matches, and the most recent of those was against Haas, in a close three-setter of swinging fortunes. Appropriate, perhaps.

There were more seesawing fortunes in Cincinnati, where it looked as though Haas would again take the opening set when he took a 3-0 lead. But he squandered five chances to serve out the set at 5-3 to give Nalbandian a chance to play his sweetly timed, tactically smart brand of tennis. It took him more than nine minutes to get the break but just a minute to hold serve and take the set to a tie-break. Nalbandian then cruised through seven straight points in a master-class of placement, angle and neat volleying—12 out of 14 net winners by the end of the set.

The Argentine run continued with a love service game before Haas ended Nalbandian’s 16-point surge, but the German still conceded the break. He was 0-2 down and looked as though his 18 matches in a month was taking its toll.

Nine minutes later, however, and Haas was back on level terms, and the set stayed on a knife-edge throughout its one-and-a-half-hour progress to a second tie-break. This time, Haas took control with his big forehand and levelled the match with a 16th ace.

Suffused with energy, he upped the attack in the third. His elegant backhand swung freely and even his drop shots began to work. It was now Nalbandian who looked weary, picked holes in the line calls, lost concentration and conceded the break as they headed to the same 6-3 conclusion as last week. The points may have been split down the middle, 144 apiece in this three-and-a-half-hour marathon, but the 34-year-old Haas looked the fitter, faster and more confident man at the finish.

And it’s hard not to smile, for the German is, quite simply, a class act. On court, he’s an emotional, stylish and attacking shot-maker, off court an optimistic and articulate enthusiast who clearly relishes every remaining day he can wield a racket. He is a player to value on many levels.

The tennis of Nalbandian can also bring joy to any lover of tennis but he, unlike his repeat opponent, seems unable to find that same joy.

Neither man is now destined to win the elusive Grand Slam that seemed within touching distance of their huge talents a decade ago, but one of them continues to enjoy the rest of his ride, wherever it takes him.