Theirs has been one of the most enduring rivalries in 21st century tennis.

The 33-year-old Roger Federer and 32-year-old David Ferrer first played one another in Vienna in 2003. Top seed Federer was newly a Grand Slam champion after his first Wimbledon win, while Ferrer was still ranked 75 in the world and owned just one title, on clay, in Bucharest. It was the Spaniard’s misfortune to face Federer in the first round, and he lost 6-2, 6-2 in under an hour.

Not until three years and four tournaments later would he take a set from the mighty Swiss, and despite entering the top five in 2008, and being a constant presence in the top 10 for the last four years, he still has not beaten Federer in 15 attempts.

Yet such is the character and quality of this enduring and durable Spaniard that, despite playing second fiddle to perhaps the greatest ever to take to a clay tennis court in compatriot Rafael Nadal, and setting out on his hard-earned route to the top in an era already dominated Federer, the Ferrer work ethic and passion have remained undimmed. And for this ever-modest man, the rewards have continued to come.

Indeed it’s hard to believe that Ferrer considered early retirement after a persistent dip in form and rankings during 2009, but he went on instead to break milestone after milestone. In 2010, he won two titles from three finals—one a first Masters final in Rome. In 2011 he reached two Masters finals, and in 2012 eventually won his first Masters title in Paris—his seventh title of the year.

That same year, he began a run of 10 straight Grand Slam quarter-finals, marked his first semi at the US Open, followed by his first ever Major final at Roland Garros in 2013—and a career-high ranking of No3. He even scored wins over his nemesis Nadal not just indoors last year but on the clay of Monte Carlo this spring.

But he had still not beaten Federer, despite taking the Swiss to three sets in Toronto only a week ago.

And his trouble, coming into their first final since 2007, was that the Federer who suffered a dip in form and confidence just a year ago was proving to have the same durability and passion as Ferrer. He overcame back injury, switched to a new racket, joined up with ‘inspiring’ mentor Stefan Edberg and, voila, was now on a run of four back-to-back finals and led the tour with 48 match-wins.

And that intensity, that passion, was there in the body language of both men, though in very contrasting styles.

Federer opened serve, his elegant, languorous sway of a delivery belying its variety, its kick, its pace—but his penetrating stare down the court must be one of the most spine-chilling for any opponent.

In contrast, the shorter, round-shouldered bustle of Ferrer has no secrets. He is full of nervous energy, never still, tongue clenched nervously between teeth. 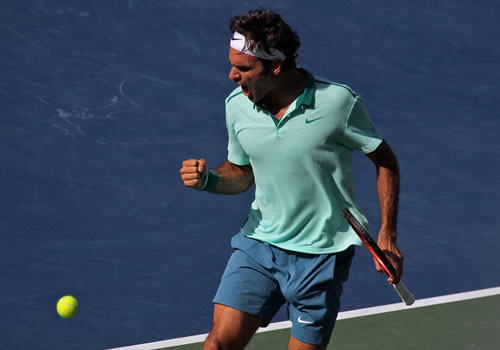 Both have wonderful movement, love to take on the attack, manipulate their opponent to extreme wings and waste not a moment between points. But the Swiss moves with a mercury-like fluidity and executes with balletic freedom; the Spaniard rolls and scurries and punches away his flat shots like a boxer.

In their various ways, they sped to 4-3, no break points, few errors, at the speed of lightning. But in the eighth game, even taking Federer on at the net, Ferrer could not contain the power and touch of the Swiss and conceded the only break of the set. Yet he almost broke straight back with some remarkable reflex hitting and a clean backhand winner down the line. Pounding cross-court to the Federer backhand wing, Ferrer went 0-40 for three break points, and then earned another as a pressured Federer sent a forehand long.

But Federer showed something of his mentor’s volleying class with a great serve- volley-volley finish, 6-3.

Could Ferrer possibly break the silky-smooth attack of Federer? Well, when he faced four break points and six deuces in the first game of the second set, it looked doubtful. But ‘iron-willed’ is Ferrer’s middle name and he came through after more than 10 minutes. He was playing well, and knew it, and found an extra injection of energy and some near-flawless baseline striking to demand more from Federer.

As so often is the case, a failure to break through after so many chances takes a mental toll. Ferrer pounced on Federer with a couple of screaming winners and, at the fourth time of asking, pulled off a return-of-serve backhand to break.

Even the serve and volleying of Federer could not hold back the on-fire Ferrer. Under pressure, the Swiss serving level wavered and he twice netted volleys to give up another break, and Ferrer held to love for 5-0, winning 15 of the last 17 points.

Federer had to fight off yet more break points to finally get a game on the board, but Ferrer also stood firm against a break chance to serve out the set, 6-1. Federer had made must four points from 13 net approaches: Ferrer had made only seven errors to 12 winners.

Ferrer always has the look of a man who has shed every drop of energy onto the court in sweat, but not so Federer. But on this evening, in search of his first Masters title since he won on this very court two years ago, he too was drenched, his neck flushed red, his shot-making rushed. Time, then, for a quick comfort break.

And with the third set came another separation between the two men: Federer calmer, focused, steely; Ferrer slightly more stooped, and with a hint of weariness about the eyes. It would take a superhuman effort to maintain the level the Spaniard had hit in the second set, and after the cleanest Federer service hold since the opening set, Ferrer missed a couple of first serves. Federer drove home a forehand winner, a return-of-serve bullet and finally broke serve—and, very likely, Ferrer’s will.

The character of the Spaniard was on full show just once more as he courageously fought off four break points for 2-4, but this was a drained man. Federer was not about to offer any sign of weakness: A couple of aces took him to 5-2 and he unceremoniously broke one last time for to claim his sixth Cincinnati title, his 22nd Masters, his 80th career title.

Federer’s words summed up what every person in tennis has always felt for the big-hearted Ferrer:
“All I can say is, we respect him so much. He is such an unbelievable fighter, such a true professional: He’s a real inspiration for all of us.”

Ferrer’s modest response was cut short by a tear: “I never can beat Roger, he’s too much for me… but the Senior Tour, I will beat him then!

“He’s the best of history and I’m very lucky to play the best player of the world.”

Federer though, at 33, looks as fit and eager as he did in winning that last Cincinnati title, in the summer of 2012 when he also won Wimbledon and reclaimed the No1 ranking.

He is a long way from reaching the top of the pile—and that is no longer his priority—but he leads the US Open Series ahead of New York and has, against the predictions of many at this time last year, put himself among the favourites for the last Grand Slam of the year.