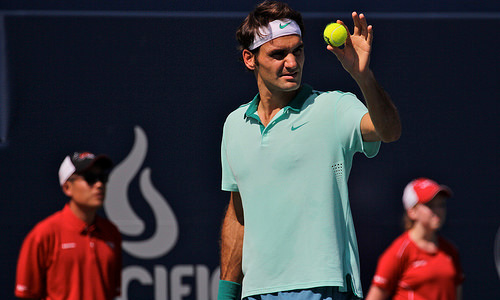 There was David Ferrer, winner of the Paris Masters, and Stan Wawrinka, who claimed his first Major and Masters this year, in the top half. By the time the draw had advanced to the semi-finals, only Ferrer remained: Not a Grand Slam champion in sight.

But in the bottom half were two men with multiple Grand Slam and Masters titles, two of tennis’s “big four”, and what is more, two former champions in Cincinnati. Yet not only were the two most decorated men left in the draw, Roger Federer and Andy Murray, both in the bottom half, they were drawn to face one another in one quarter-final.

This unfortunate turn of events was the direct consequence of the surgery that Murray had been forced to undergo almost a year ago. A chronic back problem forced him off the tour for four months, and his ranking took a hit.

He had made a gradual return to form and fitness during 2014, but had slipped outside the top eight, and had not managed to reach a final since his Wimbledon victory last summer.

Federer had also been through a tricky 2013 in which he had suffered from back injury. He ended the season with just one 250 title and his own slump in the rankings. But with a new racket in hand, a new mentor in his box, and reclamation of his fitness, his return in 2014 had been faster and more successful than Murray’s. He was back to No3, had won more matches than any other man this season, but was still in search of his first Major or Masters since Wimbledon and Cincinnati in 2012.

As two of the four dominant players in tennis, Federer and Murray had played one another 21 times before, and in some of the most compelling matches of the last six years. Their first Grand Slam match was in the US Open final of 2008, their second the Australian Open final of 2010, and their third in the 2012 Wimbledon final. All went to Federer—but then Murray turned the tables dramatically in the final of the London Olympics and, six months later, in the Australian Open semis—their first five-setter and a victory to Murray.

Their most recent match was also in Australia, with Murray still finding his way back from surgery, and he lost in four. However, when it came to Masters contests, Murray had the upper hand: seven matches, six wins to Murray—including both in Cincinnati.

If there was a measure of the form of both, just over a week ahead of the US Open, this was as good a place and as good a time as any. And with Rafael Nadal absent, Novak Djokovic, Stan Wawrinka, Tomas Berdych and Toronto’s champion Jo-Wilfried Tsonga beaten, the survivor of this show-case quarter-final had serious designs on the Cincinnati title.

Murray was first off the mark, but a double fault brought up two break points in the very first game. Murray served big to save them, but came under heavy pressure again in the third game, facing no fewer than four break points through an 8-minute exchange. But he held with an ace, and what does not kill you makes you stronger.

Federer had to preserve his composure after the disappointment of failing to break. As has been his way at every opportunity this year, he aimed to attack, to come to the net, and he held with ease, then pounced on another break point in the fifth, forcing a forehand error from Murray for the break.

But a tentative double fault, and three missed first serves opened the door for Murray with a break-back point, but Federer consolidated for 4-2. He faced more trouble on serve, again with a double fault and a break point. It was edgy tennis determined more by errors than winners, with Murray steadily working himself into a rhythm, but bold serve-and-volley play held off the challenge once more.

Federer used slice, angle and variety to break the Briton’s dangerous rhythm, drawing Murray errors, and he made a sudden clean break to claim a 6-3 set. It had not been pretty, or tidy, or flowing. Both men made more errors than winners, but it was Federer who served the better and made the more winners at the net—8/12—and his attacking tactics had earned their reward.

But the Swiss played a careless third game in the second set, making two straight volley errors and netting a forehand to concede a quick break. The invitation was offered and Murray was not about to refuse it as the momentum shifted. Murray’s serving and blistering return of serve drew more errors and more missed first serves from Federer—and another break for 4-1.

Federer only knows one way to respond and that is to attack. He made two stunning ghosts to the net to pick off winners and work a break at the start of a scintillating period of play by both men. The Swiss held off some quite glorious returns of serve from Murray with chess-like defence that switched into winner-mode, held, and then benefitted from a wayward Murray game to break again. Another edgy hold from Federer, and he had put together a four-game run to lead 5-4.

Murray briefly steadied the ship with one more game, but lost focus and rhythm against some composed play from the five-time champion. Murray was still, as throughout the match, unable to get his first serve into a groove, hitting at below 50 per cent, and Federer made a match-winning break to take set and match, 7-5, after an hour and a half of sometimes brilliant, sometimes wayward tennis. Both men, indeed, ended with more errors than winners.

But the victory leave Federer, the oldest man of a mature last eight, still on track for his 80th career title and his 22nd Masters, though he still faces a mountain of a task. His semi-final opponent is the huge and high-flying Canadian Milos Raonic, who has taken Federer to three sets in both previous Masters meetings—but is a more complete and experienced player than in 2012.

Meanwhile, Murray will go away to lick his wounds, and wonder just what went awry after leading 4-1 in the second set. And he has just over a week until the US Open to work it out.