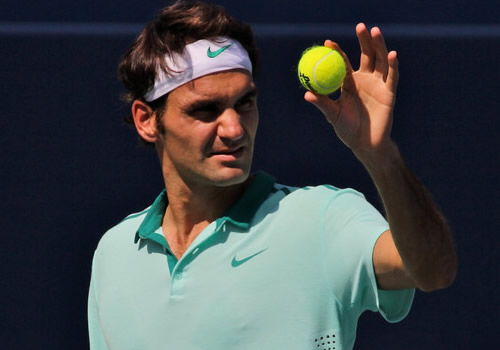 What a difference a day makes in the fast-moving world of the tennis tour.

No sooner had Sunday crowned Jo-Wilfried Tsonga in Toronto, no sooner had Roger Federer made his exit with the runners-up trophy, than the two chased their colleagues south to a humid Cincinnati and the second Masters tournament in the US Open Series.

But oh what a difference two days make. When Tsonga arrived for his first-round match with four top-10 wins over Novak Djokovic, Andy Murray, Grigor Dimitrov and finally Federer from Toronto, earning re-entry to the top 10, he was on track to meet Djokovic again should he reach the quarters—but that did not take account of the toll of his Toronto run and the flair of Mikhail Youzhny. The Frenchman was unceremoniously dumped out in the first round, 6-1, 6-4.

And it was not just Tsonga. Two more of the Toronto semi-finalists, Feliciano Lopez and Grigor Dimitrov, also fell at the first hurdle.

No wonder Federer, who was far from his best in the Toronto final after playing night sessions all week and with very little recovery time under his belt before Cincinnati, professed some disquiet at seeing his vanquisher beaten in his opening match:

“That’s not very good for me when I see that happening. From that standpoint, the fear is always there from the first round regardless of how you approach a tournament. But a lot of things have happened in the last year for me, and I’m happy that most of it has been really positive.”

Since this time last year, he has rebounded from back injury, adopted a new racket, and taken on mentor-coach Stefan Edberg. The rewards have been impressive: Titles in Dubai over Djokovic and Tomas Berdych, the Halle title, three Masters finals and the Wimbledon final. He was now aiming to win a sixth Cincinnati title—his most successful Masters tournament—which would take him to 80 titles.

Already leading the tour with Nadal this year in match-wins—44 of them—he needed just one more win to take the lead, but he would also reach another milestone that no other man has achieved: 300 Masters match-wins.

Federer’s cause for disquiet, aside from Tsonga’s early loss and his own quick turnaround to the Ohio conditions, was the big young talent from Canada who he faced in his opener, Vasek Pospisil.

“Because I’ve played last week, I’m just hoping to get through the first round just because I know how hard it is to transition with sort of a day-and-a-half of practice and then having to play a difficult best-of-three set match.”

The wariness was due also to the attacking tactics and all-court ability of Pospisil: It would recall their very close contest in Federer’s home tournament of Basel last autumn. The Canadian took Federer to three long, tough sets, 6-3, 6-7(3), 7-5, in 2hrs 40mins. And it did indeed turn into a highly competitive and high-quality match.

Pospisil, nervous to start with, soon rose to the occasion with his athletic, forward moving game. Federer held onto the first set with some clutch serving in the tie-break after failing to convert a couple of break point chances. But Pospisil, serving first, took the second with a break in the 12th game, 7-5.

By the third, it was anyone’s match, but the mental and physical strain of handling the variety of Federer’s tennis showed in a desperately weak service game to concede a break in the third, and another to go 1-5 down. With the bit between his teeth, Federer surged away and Pospisil could not respond. The Swiss had his 300th Masters match-win, 6-2.

Interviewed afterwards, Federer confirmed that he had wanted to tax his opponent’s concentration with as much variation as possible—a measure of the smartness of Federer’s tactics as well as the economy of his serving and net game. In that final set, he won 11/11 first serve points and 5/6 on second serves, and had made fewer winners than Pospisil but also a lot fewer errors.

Federer next faces more dangerous hurdles, the first possibly the resurgent Gael Monfils, then either John Isner or Murray in the quarters.

The tall American is no stranger to Masters finals on home soil. The 6ft 10in 29-year-old was a finalist here last year and in Indian Wells the year before. He beat the constantly improving Kevin Anderson in his opener and then Marinko Matosevic in his second. But it is three years since he played Murray, and even in his present form, it’s hard to see the Briton not scoring another win.

Murray came through his opener against Joao Sousa with very little trouble, 6-3, 6-3. Indeed, he hit his rhythm quickly and countered some aggressive and fleet-footed tennis from the No37-ranked man from Portugal who is enjoying close to a career best ranking.

Murray has not reached a final since Wimbledon last year—essentially since needing time out for back surgery—but with each match he plays, he has looked more like the man who won his first Major at the US Open in 2012.

So the key to that bottom semi-final place will depend on the fortunes of Murray and Federer up to and including their scheduled quarter face-off. Whichever of them makes it through, however, knows already that they will not have to contend with Berdych, who was a surprise loser to Yen-Hsun Lu in three sets.

Waiting there instead could be Ernests Gulbis, who beat Federer at Roland Garros this summer, or the fast-improving Milos Raonic, who has a winning record against Murray, including Indian Wells this year.

But it would take a brave person to bet against Federer or Murray making it to a face-off with Djokovic in the final. For Tsonga, in winning the Rogers Cup, became one of a very exclusive quartet of men to have won a Masters title during the last four years. Since Murray won in Canada in 2010, only the Frenchman, Robin Soderling, David Ferrer and Stan Wawrinka have each claimed one of 36 Masters crowns—and the honours board in Cincinnati did not offer much hope that the storyline would change: Federer has five titles here and Murray two.

Notable by its absence, however, is the name of Djokovic, despite being a finalist here four times. And even more notable is that this is the only Masters title the world No1 has failed win.

And most significant of all, no other player has yet managed to win even eight of the nine crowns. So special would be the achievement that the ATP last year came up with special title for the first man to seal the set: A Career Golden Masters.

On paper, the prospects look better for Djokovic this year than ever before. Rafael Nadal, the only man in a decade to win in Canada and Cincinnati back to back, is missing with injury, along with Juan Martin del Potro, Richard Gasquet and Kei Nishikori.

Having beaten Gilles Simon in his first match, Djokovic’s next plays Tommy Robredo, who may already have scored wins over Jack Sock and Sam Querrey, but has not beaten Djokovic since 2005.

The top seed’s quarter-final opponent looks destined to be Ferrer. The gutsy Spaniard survived match points in the second set to win in three tie-breakers against Philipp Kohlschreiber—but against Djokovic, he has scored only two wins in 12 matches since 2008.

By the semi stage, Djokovic could be left with either Wawrinka—who finally tasted Grand Slam victory over the Serb in Australia after two close-run Major matches last year—or Marin Cilic, who came through in two tie-breakers against Fernando Verdasco. However, the tall, talented 2013 Wimbledon semi-finalist Jerzy Janowicz, looked mighty impressive in beating this year’s Wimbledon semi-finalist, Grigor Dimitrov.

Should Federer or Murray reach the final, though, it would be a serious case of dejà vu for Djokovic. In the Serb’s four previous Cincinnati finals, he has lost to those two men twice apiece. No doubt victory, should he finally seal that unique “golden” record, would be doubly sweet should he beat one of them to do so.