Marianne Bevis looks ahead to this weekend's Davis Cup ties, with Roger Federer a notable absentee for Switzerland 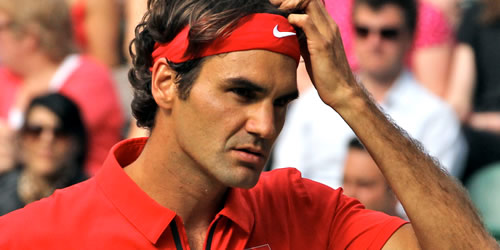 Switzerland will be without Roger Federer when they take on Czech Republic Photo: Marianne Bevis

The Davis Cup, the world’s largest annual international team competition, has involved over 5,000 players since it began in 1900. In this its centenary year, the tournament will see 130 nations and more than 500 athletes taking part.

To mark this special year, the International Tennis Federation launched a new award to honour players who have represented their country with particular dedication throughout the event’s history.

The Davis Cup Commitment Award will go to 299 players who have played at least 20 home-and-away ties.

Many of the recipients are long retired while many more will be honoured posthumously. Indeed it is a very select band of active men that has made the cut: just five in the current top 50 singles rankings—though Andy Roddick, now retired, is a sixth.

Of those five, only two are scheduled to play in the first round of the World Group ties this weekend: World No6 Tomas Berdych and No30, Jurgen Melzer.

And yet it is the highest ranked recipient of the Commitment Award, Roger Federer, who has, by his absence, drawn much of the pre-tie attention—despite the return to Davis Cup play of Novak Djokovic fresh from his record-breaking Australian Open victory.

For Federer has received, not for the first time, some opprobrium over his lack of participation, most recently this week from the Associated Press: “By not making his Davis Cup plans clear in recent months, the 31-year-old Swiss star has been the target of some criticism at home”…though as Swiss Davis Cup captain, Severin Luthi, explained, any lack of clarity arose only if Federer had made an unexpectedly early exit in Australia.

The ‘criticism at home’, in fact, went further back, to a report from Swiss daily, Tages Anzeiger, after Federer played in his home tournament of Basel: “After the demands of Olympic year, Federer seeks to plan intelligently with a view to extending his career as far as possible. He seems to be contemplating no longer giving his city’s tournament top priority, as already happened in recent years with the Davis Cup.”

It was a clever use of a positive to set off a negative, though the latter comment showed an unfortunate lack of perspective, for it came a month after Federer, the only member of the ‘big four’ to play Davis Cup last year, had won both his singles rubbers in the Davis Cup World Group play-offs.

The inclusion of Federer on the Commitment Awards list is, then, an opportunity for some context.

Two other Award recipients join Federer in the men’s top-10, Berdych and Janko Tipsarevic: Federer has played more Cup matches than either.

He has played more than fellow top-50 recipients, Feliciano Lopez and US stalwart Roddick, too.

He has also played more than the other recipients playing in the World Group this week, David Nalbandian, Olivier Rochus and Michael Llodra.

Indeed only Melzer has played more rubbers—59 to Federer’s 58—although the Swiss won three-quarters of his Cup matches as opposed to losing more than half of them.

It is too soon, perhaps, to compare the Swiss man’s record with those of his younger competitors. Djokovic, Rafael Nadal and Andy Murray may yet build a record that qualifies for a Commitment Award, though his contemporary and current No4, David Ferrer, still remains well short.

But whether any of them will better Federer’s run of playing every year but one since his first tie in 1999 remains to be seen. Indeed, who would bet against him taking another record before he is done. He is currently second only to one Swiss player in the country’s 90-year Cup history, Heinz Gunthardt, who played 15 ties. Federer is on 13—and he is surely not done yet.

Djokovic, unlike Federer, has already tasted Davis Cup victory, in 2010, and returns for the first time since retiring in his opening rubber of the 2011 semi-finals. Although he has lost the support of fellow top-10er Tipsarevic through injury, he is still backed by former world No12, Viktor Troicki, so Serbian hopes will remain high.

Berdych finds himself in a similar position, back to defend the Czech Republic’s title but without his key second, Radek Stepanek. As luck would have it, therefore, had Federer opted to play this tie with Stan Wawrinka, the Swiss team might have been favourites to win—and possibly advance to their first semi since 2003.

Back then, the Swiss team lost to Australia, 2-3, and Federer lost to the current player with the best Cup record of all: Lleyton Hewitt. The 115-ranked Aussie is in action again this week, in Group 1 competition.

The Swiss have not made it beyond the first round of the World Group since 2004 and the last time these teams met in 2007, Stepanek defeated Wawrinka in straight sets in the decisive rubber. With both sides missing key singles members, it could all come down to the doubles.

Belgium won its only meeting with Serbia in 2005 when a young Djokovic lost both his singles rubbers, one of them to Rochus. They will meet again this year with almost certainly a different outcome but, with Tipsarevic injured, this may be a less straightforward tie than expected for the 2010 winners.

Spain has won the Cup five times this century, in 2000, 2004, 2008, 2009 and 2011, and has been runner-up four times, including last year. However, Spain is more vulnerable than in many years, missing its top players Nadal, Ferrer, Fernando Verdasco and Lopez—and topped by a last-minute withdrawal with injury by Nicolas Almagro.

Croatia beat Italy in both previous meetings, in 2001 and 2008, and the Italians have not won a World Group tie since 1998, when they went all the way to the Final. But although Croatia is playing in the World Group for the fifth straight year, their line-ups suggest this will be as close as the previous two meetings.

The two countries have not met for 13 years, a victory to the USA, and although the Americans are the most successful country in the history of Davis Cup, they have not reached the final since 2007. However, with one of the strongest squads in Round 1 and home territory, they should have no trouble reaching the quarters, and perhaps further, this year.

France is under the new captaincy of Arnault Clement and has the best line-up in Round 1, even without Gilles Simon. They have won the title nine times, most recently in 2001, and have been runners-up seven times, including in 2010. This tie should be no problem, and the breadth and depth of the French squad make them dangerous throughout the draw.

Argentina has a 6-2 lead over Germany and they also met at the same stage of the competition last year: Juan Monaco and Nalbandian led Argentina to a 4-1 victory. Though the hosts have reached at least the quarterfinal stage in each of the last 11 years, advancing to three finals, they have never won. Without del Potro, they could have a struggle on their hands—thought the home clay will help their cause.

Austria reached the World Group quarterfinals last year for the first time in 17 years by beat Russia, then fell to Spain. Home advantage and clay courts may give Kazakhstan the edge but it’s hard to see either team getting through the next tie against Switzerland or the Czech Rep.