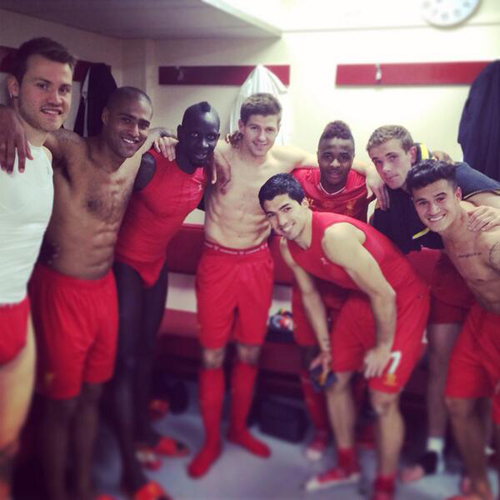 Eight members of the Liverpool side that beat Man City at Anfield Photo: Mamadou Sakho/Twitter

Liverpool cemented their position at the top of the Premier League after a dramatic 3-2 victory over Manchester City at Anfield on Sunday.

Philippe Coutinho netted a 78th-minute winner after David Silva’s strike and a Glen Johnson own goal had cancelled out first-half goals from Raheem Sterling and Martin Skrtel.

Here are all the post-match tweets from the triumphant Liverpool squad as the Reds moved seven points clear of City, although the Citizens have played two games less.

Liverpool right-back Glen Johnson (‏@glen_johnson) hails a big step in their bid to win the title: “What a result!!! Great game of football! Another huge step closer #LFC”

Reds goalkeeper Simon Mignolet (‏@SMignolet) believes the key to their success is team spirit: “Long 90 minutes today but we got through because of great team spirit and everyone’s support! #YNWA #4togo”

Reds winger Raheem Sterling (‏@sterling31) is thrilled with his man-of-the-match award: “Great team win glad to be on score sheet and be named man of the match #GODISGOOD Just want to say woow the atmosphere today from our supporters #priceless”