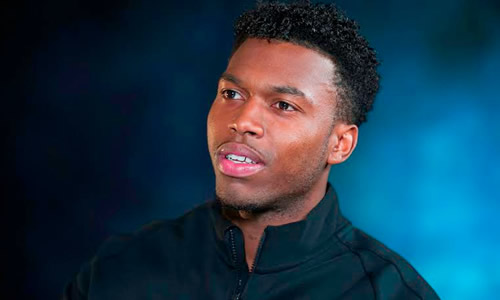 Daniel Sturridge has spoken of his pride at seeing Raheem Sterling’s rise at Liverpool.

The 20-year-old winger has developed into one of the Premier League’s standout players in his position in recent seasons.

He has scored 16 goals in 83 league games for the Reds and has been capped 13 times by England.

And Sturridge believes that the “level-headed” youngster deserves all of the success that he has been experiencing since his breakthrough at the Merseyside club.

“He can go as far as he wants to go,” said Sturridge, speaking exclusively to BT Sport as one of its ambassadors.

“I am proud of him for everything he is achieving. I think if he continues to work hard and continues to believe in himself and has no distractions in his life – there’s none now and I hope that continues. He’s level headed and that’s what I like about him.

“I think he needs to get the credit he deserves for things he’s achieving because not many players are doing what he’s doing in the world. I am proud and I hope he continues to play like he is.”

Sterling, who earns around £30,000 a week at Anfield, is understood to be have been offered a new contract by Liverpool of more than double the salary.

The England international’s current contract with the Merseyside club expires in 2017.

Sterling, who has scored five goals and made five assists in the top flight this term, will be expected to feature when Liverpool travel to Crystal Palace in the Premier League on Saturday afternoon.