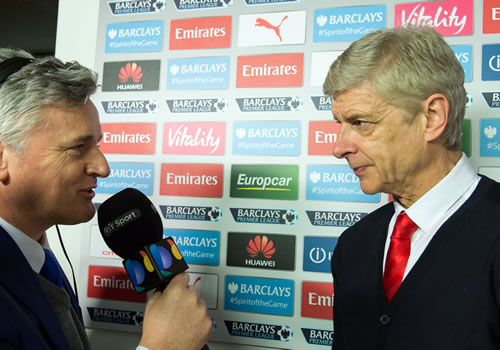 Arsene Wenger did not sign an outfield player in the summer Photo: BT Sport

Danny Mills believes that Arsenal are unlikely to make any signings during the January transfer window – because of Arsene Wenger’s “stubbornness”.

Wenger was criticised by many after he opted not to bring in any outfield players during the summer transfer window and only signed goalkeeper Petr Cech from Chelsea.

Wenger has a philosophy and he sticks to it. He’s stubborn and determined

Arsenal’s injury woes worsened at the weekend after they lost Francis Coquelin to a knee injury, with the French midfielder set to be sidelined for at least two months.

But despite the clamours for Wenger to splash the cash in January and bolster his squad ahead of the second half of the season, Mills feels that the Frenchman is far more likely to stick to his guns and keep his chequebook in the drawer.

Mills told Sportlobster: “Arsenal currently have an exhaustive injury list but I highly doubt Wenger will make any signings in January.

“He has a philosophy and he sticks to it. He’s stubborn and determined. He likes to put his belief in younger players and the more the media tell him what to do, the more likely he is to stick to his guns.

“I can’t see Arsenal signing a superstar striker. Prices are inflated in January as selling clubs are more reluctant to part with their best players. But also, who’s out there for Wenger to target? Benzema and Higuain have been spoken about for ages and they never come off.

“If they are to improve their goal-scoring threat they’re going to have to find a rough gem and hope Wenger can polish him up.”

Arsenal head into Sunday’s Premier League clash with Norwich City in fourth place in the Premier League table after their 2-1 loss to West Bromwich Albion at The Hawthorns on Saturday.