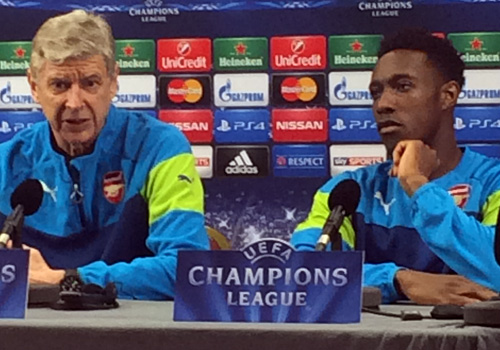 Danny Welbeck says the Arsenal forwards are giving Arsene Wenger a selection headache ahead of their clash against Monaco on Wednesday night.

The Gunners have scored 15 goals in their last six games in all competitions ahead of the first leg of their Champions League last-16 tie at Emirates Stadium.

Olivier Giroud, Santi Cazorla, Mesut Ozil and Theo Walcott have all netted in recent weeks, whilst Alexis Sanchez is the north London club’s top scorer with 18 goals this season.

Speaking to the media at London Colney on Tuesday afternoon, Welbeck described the healthy competition in the Gunners squad for starting places ahead of the European tie.

“It is working well [the attacking setup]. Obviously there are a lot of attacking options which gives the manager a good headache to have,” Welbeck said.

“Once everybody is on the pitch, they’re going to give 100 per cent and their best for the team – that is most important.

“Once you’re on the team, you need to do your job. Whoever comes in, will do the same.”

Welbeck warned Arsenal that Monaco will pose a tricky threat despite the perception that the Gunners have benefited from a soft tie after having faced Bayern Munich and Barcelona in the last-16 in recent seasons.

“It is going to be a tough tie for us. We want to get the right result and set us up nicely for the second time,” said Welbeck.

Welbeck continued: “You have to try and get the win on the day. Tomorrow is the start of the knockout round. We’re well prepared and we’ve analysed their team.”

Welbeck has scored seven goals in 22 appearances in all competitions following his £16m move to The Emirates from Manchester United last summer.

Jose Mourinho: Arsenal should be challenging for the title