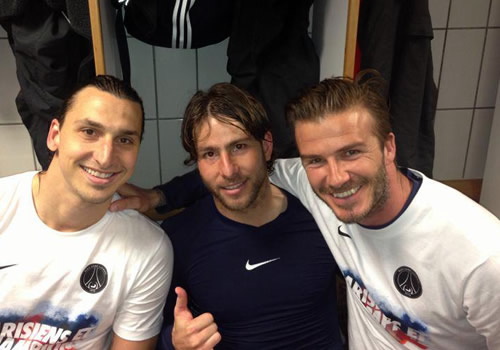 David Beckham has announced he will be retiring from football this summer aged 38 after a glittering career at the top level.

The midfielder, who celebrated winning the Ligue 1 title with Paris Saint-Germain last weekend, had been offered a new deal by the French club but said that the “time is right” to hang up his boots.

“I’m thankful to PSG for giving me the opportunity to continue but I feel now is the right time to finish my career, playing at the highest level,” said Beckham, who signed a five-month deal with PSG after leaving LA Galaxy last year.

Beckham joined Manchester United as a 14-year-old and made 398 appearances for the Red Devils, winning six Premier League titles, the Champions League and two FA Cups.

The midfielder joined Real Madrid in 2003 and made 105 appearances for Los Blancos, scoring 20 goals and winning the Spanish league title in 2007 before moving to LA Galaxy that same year.

He continued: “If you had told me as a young boy I would have played for and won trophies with my boyhood club Manchester United, proudly captained and played for my country over one hundred times and lined up for some of the biggest clubs in the world, I would have told you it was a fantasy. I’m fortunate to have realised those dreams.”

Former England captain Beckham was handed his international debut against Moldova in 1996 and made his 115th and final appearance for the Three Lions in a 3-0 win over Belarus back in 2009.

“To this day, one of my proudest achievements is captaining my country,” Beckham, who is England’s most-capped outfield player, continued.

“I knew every time I wore the Three Lions shirt, I was not only following in a long line of great players, I was also representing every fan that cared passionately about their country.

“I’m honoured to represent England both on and off the pitch. I want to thank all my team-mates, the great managers that I had the pleasure of learning from. I also want to thank the fans who have all supported me and given me the strength to succeed.”

Beckham also paid tribute to his family for supporting him during his career.

“I wouldn’t have achieved what I have done today without my family,” he said.

“I’m grateful for my parents’ sacrifice, which made me realise my dreams. I owe everything to Victoria and the kids, who have given me the inspiration and support to play at the highest level for such a long period. I also want to thank Simon Fuller and his team for their continued support.”

Backham could feature twice more before the end of the season, with PSG wrapping up their campaign on 18 May at home to Brest.