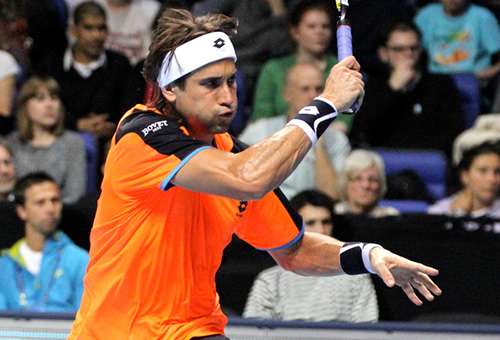 David Ferrer is currently eighth in the race to London Photo: Marianne Bevis

Tomas Berdych, whose position in the rankings during the US Open Series slipped to No7, and to No8 in the Race, is again proving a tough nut to crack as the ATP World Tour Finals loom over the horizon.

The big Czech sailed into the quarter-finals in Beijing, beating Viktor Troicki 6-3, 6-4, and that has taken him past David Ferrer to seventh in the Race.

Berdych is aiming to reach the season’s climax for the fifth consecutive year, and can thank one of his most consistent seasons in Grand Slam competition for putting himself into such a strong position. For the first time in a career that, year-on-year, has continued to break new ground, Berdych reached at least the quarter-finals of three Majors, advancing to the semis at the Australian Open.

His Melbourne run was followed by a strong spring that saw him take the prestigious Rotterdam title and then reach the final in Dubai and the semis in Miami.

Berdych certainly has a tough task if he is to add more points this week, though. Next up is John Isner—though the Czech has beaten the tall American twice this year already—and beyond that lies Rafael Nadal in the semis.

And despite his progress thus far, Berdych is not yet a shoo-in for London. Breathing down his neck is Milos Raonic, who has also reached the quarters at the other 500 tournament this week in Tokyo. Another win, and Raonic too will overtake Ferrer, pushing the Spaniard, who has now lost his opening matches in back-to-back tournaments, into 9th place. What’s more, both Andy Murray and Grigor Dimitrov could race past Ferrer before the week’s end.

Raonic’s path to the finals has been cleared of all the other seeds in his half, with Jo-Wilfried Tsonga and Roberto Bautista Agut joining Ferrer on the sidelines. Raonic therefore next takes on unseeded Denis Istomin.

Rather like Berdych, the 23-year-old Canadian, who is competing with Dimitrov to be the first man born in the 1990s to reach the World Tour Finals, has also been remarkably consistent this season. He has reached the quarter-finals or better at 10 of his 13 tournaments since returning from a left ankle injury in March. Among those quarters have been six Masters, the French Open and Wimbledon, where he went on to reach the semi-finals.

Raonic has been the runner-up in Tokyo for the last two years, and he looks in a strong position to reach his third final. He also looks set to meet the man who beat him there in 2012, Kei Nishikori, who is also the only remaining seed in his half of the draw.

Neither Raonic nor Berdych is likely to catch Marin Cilic nor Nishikori this week, the two men who lie at Nos 5 and 6 respectively in the Race. However the top 11 are beginning to put some clear water between themselves and the rest.

Only winning one of the remaining Masters in Shanghai or Paris appears to offer a lifeline to Tsonga, Bautista Agut, Ernests Gulbis, who retired against Martin Klizan in Beijing, and Kevin Anderson, who lost to Jeremy Chardy in Tokyo.

Race to London: the standings ahead of Beijing/Tokyo quarters