In Valencia, nine of the 32 main draw players are in their 30s while in Basel, no fewer than 11 have entered their 4th decade

There is one fact that may have gone unnoticed about the headline names in Valencia and Basel this week—indeed one factor that permeates both the draws and recurs with ever-greater frequency throughout the rankings. Both David Ferrer and Roger Federer are enjoying great form and some of their best rankings in the prime of life: their 30s.

The Swiss, a youthful 31, has a tour-leading six titles this year, won his first Grand Slam since the start of 2010 and reclaimed the No1 ranking on his way to an unprecedented 301 weeks as the top man. 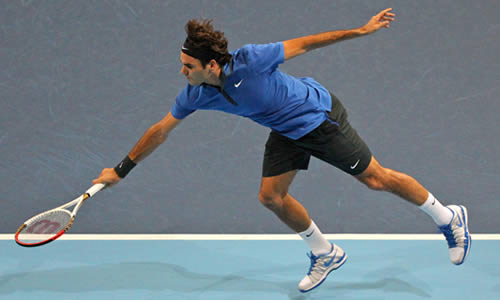 The Spaniard follows him on the 2012 honours list with five titles, the most he has ever won in a single year since he turned professional 12 years ago. His successes have come on grass, clay and hard courts and have taken him to his highest ranking in more than four years.

Needless to say, both have qualified for the World Tour Finals—Federer for the 11th time and Ferrer for the fourth. The modest, hard-working Spaniard reached his only final there in Shanghai in 2007: He lost to Federer. 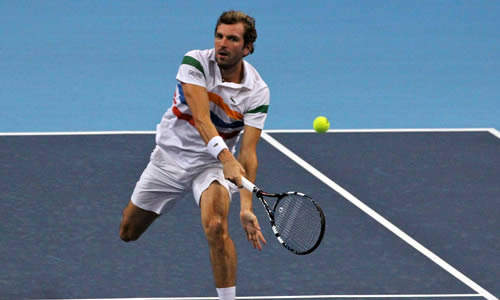 But the headliners are only part of a fine-wine story this week. In Valencia, nine of the 32 main draw players are in their 30s while in Basel, no fewer than 11 of them have entered their fourth decade.

One the highest profile in Valencia—putting aside the sentimental favourite, 32-year-old Juan Carlos Ferrero who retired from his 14-year career with his first-round loss—is the pugnacious Australian Lleyton Hewitt.

Playing courtesy of a wild card, he all but finished any hope that No4 seed Juan Monaco had of qualifying for the World Tour Finals for the first time when he beat the Argentine 6-3, 6-4 in the first round.

Hewitt’s career is littered with injuries and surgery. In 2008 he had hip surgery, in 2010 it was surgery on the other hip followed by a hand injury. Last year, he had foot surgery, battled with a groin injury and missed the end of the year with ongoing foot problems. This year he had more foot surgery, yet the man who was No1 in the world 11 years ago returned to play his 12th US Open, and reached the third round before falling in a tough battle against Ferrer.

Two of the most intensely committed players in tennis could soon meet again if both make the semis in Valencia. Ferrer’s opening match had shades of Federer’s battle against Benjamin Becker about it, another showdown between similar vintages. Ferrer played 31-year-old Belgian Olivier Rochus for the first time since they contested the final of the first tournament of the year in Auckland. Ferrer won back in January, and he had to dig very deep to wrestle the win in his home event, 7-5, 7-5. 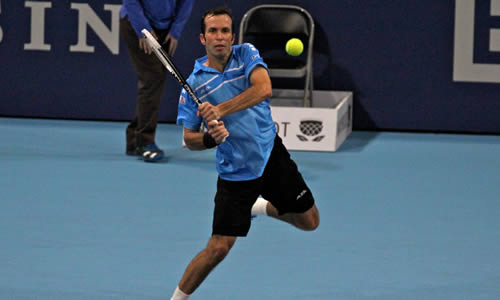 Hewitt could teach his 20-year-old compatriot, Bernard Tomic, a thing or two about blood-on-the-court commitment. Tomic is the youngest man in the Basel draw and in the top 50, and the top-ranked player in Australia, and has shown the ability and promise to make the big time ever since his thrilling run to the quarterfinals of Wimbledon last year. There he beat Robin Soderling and took a set from eventual champion Novak Djokovic, but his path has since blown hot and cold. And his match against the silky tennis of the No 6 seed Mikhail Youzhny, 10 years his senior, was a cold one.

The Russian, now owner of a PhD as well as one of the most elegant single-handed backhands in tennis, won his eighth career title and reached the semis of two other tournaments this year. A temperamental player of great all-court skill, Youzhny cut apart the game of the youngster like a hot knife through butter, slicing him to bits in their backhand exchanges. He scampered forward to retrieve drops shots and rushed back like a teenager to pick up lobs. In less than an hour, Youzhny had advanced to the second round, 6-0, 6-2.

Youzhny’s fellow Russian, Nikolay Davydenko, has struggled to make a solid run since an outstanding 2009 that saw him win five titles, including the Shanghai Masters and the World Tour Finals. 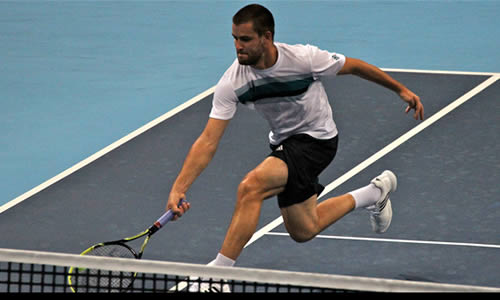 He was making his first Basel appearance in 10 years, and attempting to extend his title streak to 10 consecutive years as well: Davydenko has won a title in every year since 2003. And despite occasional signs of his old flashing shot-making—as he produced in taking Federer to three sets in the Rotterdam semis—a win against the powerful No4 seed, Stan Wawrinka, was a tall order.

The Swiss No2, making his ninth appearance in his home tournament, is a resilient man, regularly pulling out matches in the final set, and he recently took only his second set from Federer in 13 matches. Should the Russian win, though, it earn him a place in the second round with fellow 30-somethings Julien Benneteau, who at 30 reached a career high ranking in July, and Lukasz Kubot.

Jarkko Nieminen and Paul-Henri Mathieu aim to do the same, but the oldest man in the draw, the wiry and wily Radek Stepanek, lost out in three arduous sets to the comeback man from the USA, Brian Baker. 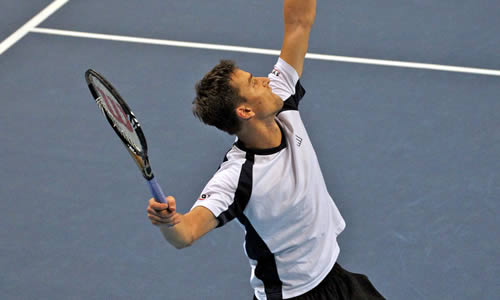 The Czech will have some consolation at the end of his 2012 season, though. He has qualified for the doubles competition at the World Tour Finals and, in December, will be competing in the Davis Cup final.

A final mention is owed to one more 30-plus man who probably had little expectation of reaching Basel’s second round. Marco Chiudinelli, playing in the main draw for the eighth time courtesy of a wild card, is ranked 149 and played the 29-year-old No65, Guillermo Garcia-Lopez. The Swiss man lost the first set, 7-5, but came back to win, 6-3, 6-4. The home crowd were as thrilled by the ‘other’ Basel man’s win as they were for his best friend Federer’s.

It was a great way to end a chilly, grey afternoon in Switzerland.