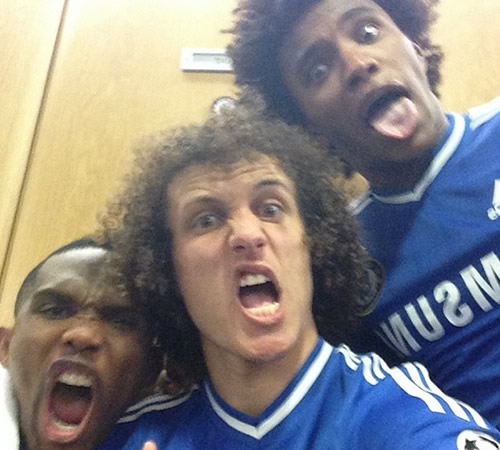 Chelsea booked their place in the Champions League semi-finals in dramatic fashion after a 2-0 win over Paris Saint-Germain at Stamford Bridge on Tuesday.

With the Blues trailing 3-1 from the first leg in Paris last week, Andre Schurrle gave the home side hope when he scored with a composed finish midway through the first half.

Oscar and Schurrle both hit the crossbar after half-time, before substitute Demba Ba scored a dramatic second in the 87th minute to send Chelsea through to the last four on away goals.

The quarter-final clash prompted plenty of activity on Twitter – and here are our favourite updates, in chronological order.

Cricketer and Chelsea fan Kevin Pietersen (@KP24) tweets his delight as the home side take the lead: “BOOOOOOOOOOOOM @chelseafc”

And so does former tennis star and fellow Blue Boris Becker (@TheBorisBecker): “#Gooooaaaaal”

Tottenham winger Andros Townsend (@andros_townsend) is torn between the Chelsea’s clash and Dortmund v Real Madrid: “Which game to watch?”

West Brom man Youssouf Mulumbu (@mulumbuofficial) is full of praise for one of PSG’s many stars: “Thiago Silva= Best defender in the world”

England legend Gary Lineker (@GaryLineker) makes a valid point: “Chelsea began the first leg with no strikers on the pitch. They’re finishing the 2nd with 3, although Jose may beg to differ.”

Chelsea defender David Luiz (@DavidLuiz_4) is understandably delighted, and posts the picture above: “God is great! Tk u everyone! Deus e grande,obrigado a todos! Não a caminho melhor doq seguir a Deus!”

Ex-Liverpool man Dietmar Hamann (@DietmarHamann) gives his full-time verdict: “What an effort from Dortmund, been different class. Even better from Chelsea, poachers goal from the real striker Ba.”

Former Brazil captain Cafu (@officialcafu) is already looking forward to the semis: “Real Madrid vs Chelsea for the semi final matches? That would be a good game to see!”