Davis Cup 2012: Radek Stepanek was the hero as the Czech Republic won the 100th final against Spain in Prague 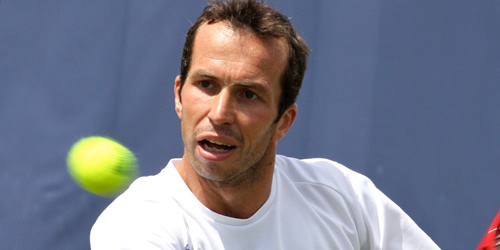 The biggest annual event in team sport, the Davis Cup, wanted to make a bang with its 100th final in Prague this year. And the last two nations standing out of the 123 who take part in this passionate tournament, Spain and the Czech Republic, obliged.

After Day 1, the countries stood at one match apiece. In the battle of the over-30s, world No5 David Ferrer got the better of the 37-ranked Radek Stepanek in straight sets, but such was the quality of the encounter that it took three hours to conclude, and more than a third of its points were finished at the net.

In the other rubber, the top Czech man, No6-ranked Tomas Berdych, had to play four hours and fives sets to get past Spain’s No11-ranked Nicolas Almagro. Again, it was quality stuff: 34 aces between them, and plenty more winners than errors. They were separated by just seven points, 147 to 140.

Day 2 brought the doubles, a match-up between the champions last week at the World Tour Finals, Marcel Granollers and Marc Lopez, and the returning Berdych and Stepanek. This one would take 3hrs 19mins and four sets, with the Czech duo coming back in dramatic style after losing the opening set.

Stepanek is ranked No4 in the world in doubles, but his partner is an infrequent player in this format—except in Davis Cup, yet it was his 16th doubles rubber win in 17, taking the Berdych-Stepanek partnership to an unbeaten run since the 2009 final—against Spain.

Far from a the 5-0 whitewash they had suffered in that 2009 final, then, the home team went into the reverse singles of Day 3 needing just one win from the two matches. Berdych could seal the first Czech victory since 1980 by beating the man ranked just one place above him at year end, Ferrer. And the last time they had played, at year-end 2011 in London, Berdych had won. But Ferrer, even without a special incentive, is the most never-say-die player in tennis—and on this day, in this tournament, in this year, he had many additional incentives.

He had already put together the best season of his 12-year career: He lead the tour with seven titles, had won a tour-leading 75 matches—equal to Novak Djokovic—and had won his first ever Masters title in Paris. He had also, in this his fourth Davis Cup final, played the lead role in getting Spain to Prague, for the top-ranked Spaniard, Rafael Nadal—so often the star of the Davis Cup stage—had sat out the 2012 campaign. It was Ferrer’s moment in the sun, and he would not retreat into the shadows: He would shine.

Indeed it became hard to find new words for the kind of tennis, kind of performance, kind of heart that the ever-eager figure of Spain’s No2 played, for if the home team thought they had devised the best conditions for their own players—a slick indoor surface to favour the power game and serve and volley skills of its two men—they misjudged Ferrer entirely. For here was a player who had long ago moved from clay-court firecracker to all-court master, chasing down any moving ball, rocketing winners down the backhand line and across court on the forehand. He happily—indeed enthusiastically—rushed the net and lobbed to perfection.

Of course the clues had been there: He won indoors in Valencia, then in Paris and went on to beat Juan Martin del Potro in London, as well.

And Berdych did not play a bad match, but was outrun, out-manoeuvred and often out-hit by the head-down bustle of Ferrer. Eight aces, 13 of 14 net points, almost twice the winners to errors and two and half hours saw the Spaniard level the tie. The most flamboyant trophy in tennis would be go to a fifth and final rubber.

That pitted an Almagro against a man who turns 34 next week who already carried over six hours of tennis in his legs: The sensible money was on Spain.

But such is the emotion of playing for one’s country that nerves can make a man soar or can make him sink. Here Stepanek, able to veer between brilliance and fractious implosion, rose to the challenge in superb style. With Frenchman Michael Llodra, he is perhaps the most natural volleyer on the tour, and he used all his skills both in attack and also in breaking Almagro’s baseline rhythm.

The Spaniard sprayed forehands and backhands wide, struggled to reach 60 percent on his first serve and could not string together enough winners to impose himself on his opponent. But after losing the first set, he looked ready to turn the match around when he broke early in the second. However, Stepanek broke back and then swept through the tie-break, 7-0.

Would the veteran have the energy and application to dominate the third set, too? By now, he looked closer to 44 than 34, his face more haggard with each game but this would also be a test of Almagro’s mettle. He too has struggled with his temperament during his career and seen winning positions slip into losses more often than he should.

Almagro had another chance to break early in the third but Stepanek held him off with his intelligent serving and bold net attacks, and Spanish errors followed. But finally, Almagro got a toe-hold and broke to take a lead: He served out the third set, 6-3.

Surely the longer this contest went on, the more the pendulum would swing in Spain’s favour? Not so. It was Stepanek who kept his cool, kept to his attacking tactics, drew the errors, defended better than he ever has: He broke to lead 5-2. They were all square on winners, at 45, but the error count was marginally in the Czech’s favour.

And so came the chance for Stepanek to serve for the trophy. He looked seized by nerves, making only his third double fault of the match to go 15-30 down, but then he came good with his eighth ace. At little short of four hours, he produced another winning serve for match point, and one last error from Almagro brought a sobbing Stepanek to his knees.

For a few minutes, the niceties of tennis were forgotten as the Czech squad submerged their hero in the middle of their stage. Stepanek emerged, to be reminded that he should shake his opponent’s hand. But his warmest handshake and pat on the back came from the hero of the Spanish squad, Ferrer: modest in victory and generous in defeat.

Berdych, Ferrer was told, bracketed him with Djokovic as the best player of the autumn: “Well, thanks to Tomas for his words, but I can’t compare with Novak Djokovic,” he responded. “He is better than me.”

The day, in any case, became Stepanek’s. In his third best-of-five match in as many days, he played perhaps the best match of his life in one of the best years of his career. He won the doubles title at the Australian Open, reached the doubles final at he US Open and took some impressive scalps in singles along the way: del Potro in Toronto, Juan Monaco in Cincinnati, Richard Gasquet and John Isner in Shanghai—and he also took sets off Novak Djokovic and Andy Murray.

By chance, Stepanek’s first professional win was also in Prague, a Challenger in April of 1997, and his tennis, still, is of a different era, when serve and volley was still alive and still able to win the big matches against high-ranked, younger players. Except that this was not a different era, though the last Czech team to win, three decades ago, were all in Prague to witness this famous win: Ivan Lendl, Tomas Smid, Jan Kodes and Pavel Slozil. Another name from the past was also watching, 1998 Wimbledon champion, Jana Novotna—a reminder that Czech women’s tennis is also in rude health: This small country won the Fed Cup in this very venue just two weeks ago.

Stepanek is now the first man aged over 30 to win a fifth deciding rubber in the Davis Cup in 100 years. So yes, the 100th final did end with quite a bang—for the Czechs and for the last man standing, Stepanek.