Davis Cup 2013: Marianne Bevis looks ahead to a busy weekend, with Serbia and France both in action 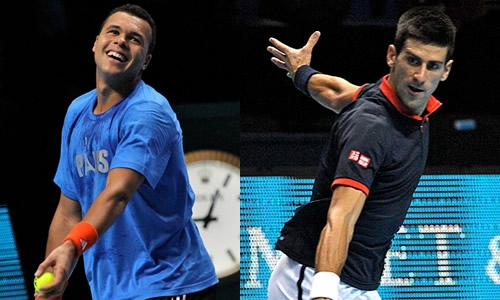 As the Davis Cup quarter-finals get under way this weekend, some of the line-ups have taken on the look of David and Goliath contests.

Only two top-10 players are in competition, with many others felled by injury. Others are missing because of the absence of big-name countries—notably the most successful of this century, five-time champion Spain. Without any of their big guns—Rafael Nadal, David Ferrer, Nicolas Almagro, Fernando Verdasco, Feliciano Lopez—playing in the first round, last year’s losing finalists made an unusually early exit.

Switzerland, without Roger Federer, also went out in the first round

Last year’s champions, the Czech Republic, are without world No6 Tomas Berdych, whose punishing schedule of 21 wins already this season has taken its toll on his shoulder.

The No3 seed and four-times runner-up, Argentina, are without world No7 Juan Martin del Potro, and other key top-10 men, Richard Gasquet for France and Janko Tipsarevic for Serbia, have also bitten the dust with injury.

But the two star names that remain may well lead their respective countries through to the semis. Novak Djokovic—missing in the last round but an enthusiastic member of the 2010 title-winning squad—spearheads a strong Serbia that also boasts the No44-ranked Viktor Troicki, while world No8 Jo-Wilfried Tsonga, ably-backed by No13 Gilles Simon, will hope to take France one step nearer his country’s 10th title.

Serbia and France also happen to be in opposite halves of the draw, so if both advance, they take one step closer to a final face-off. In the way of France is a below-strength Argentina, followed by either the Czech Republic or Kazakhstan.

Serbia, despite their strong line-up, face a real challenge in the quarters against the wide-ranging power and the home crowd of the USA in what looks to be the tie of the week. Also in this half, Canada plays Italy in an intriguing and, on paper, evenly balanced tie.

Serbia and the USA have met just once before, in Belgrade in 2010, and it was the hosts who prevailed on their way to a first Davis Cup title. The Americans, who last won the Davis Cup in 2007, are looking to reach the semis for the second year running and their fifth time in the past eight years.

Djokovic will be expected to win his two singles rubbers, but the world Nos20 and 23, Sam Querrey and John Isner, will fancy their chances against Troicki in particular—and especially as they have chosen a high-altitude venue to enhance their big-serving strengths. The US also benefits from the best doubles pairing in tennis, the Bryan brothers.

Much depends on the home nation’s Milos Raonic. He is expected to win his two rubbers—though Andreas Seppi is on a career-high run of form this season—with the Italians favourite to win against late substitute Levine. So it could come down to the doubles—and there, the hard courts and home advantage could be too much for Italy.

So often the bridesmaid, Argentina will have their work cut out against one of the strongest nations, even without Gasquet. With four runners-up trophies, the Argentines play the nine-time winning France, though their last title was more than a decade ago. But France have also finished runners-up seven times, including in 2010 when they were defeated by Serbia 3-2.

Add into the mix that France has won in all five of their previous meetings—the last on that 2010 run, 5-0—and this looks mighty one-sided.

However, the home crowd and clay courts will lift the Argentines, who invariably seem to punch above their weight, especially in Buenos Aires. The doubles rubber could, indeed, be one of those classic blood-on-the-court contests between a set of talented doubles exponents. In the end, though, it may be Juan Monaco, whose only wins on the tour this season came in the Davis Cup first round, who determines whether the doubles becomes significant.

This looked like the most one-sided tie in the quarters, until Bercych pulled out of the Czech Republic’s 2012 title-winning squad.

What’s more, the Czech No2, Radek Stepanek, is playing for the first time since neck surgery, and is only committed to the doubles. Even so, the Kazakh No1, Mikhail Kukushkin, is also on a comeback from injury—double hip surgery at the end of 2012, no less. However, Kukushkin lost his opening rubber to Jan Hajek to give Czech Republic a 1-0 lead on Friday.

The key, then, may be Czech Lukas Rosol, who joined Berdych in a stunning tie-winning doubles rubber battle against Switzerland in the first round.