Davis Cup 2014: Can Roger Federer and his beloved Switzerland win this most prestigious tennis trophy? 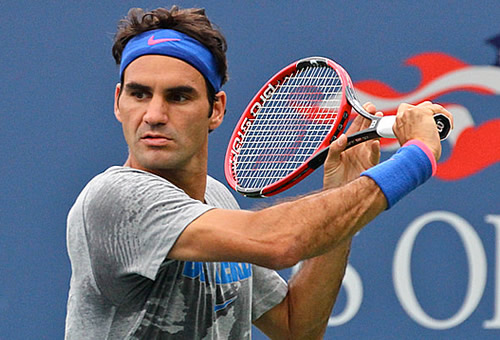 There are very few men on the tour today who have notched up as many matches and as many wins in Davis Cup competition as Roger Federer.

The Swiss man’s record is an impressive one, with 37 singles wins and 11 doubles victories among a total of 64 matches through 24 ties and 15 years—enough to make him one of the first recipients of the Davis Cup Commitment Award.

Lleyton Hewitt has a few more, no doubt, while veteran doubles specialists Nenad Zimonjic and Daniel Nester have totted up similar numbers—though of course very few in singles. Federer, however, has put together more than former Davis Cup stalwarts such as Andy Roddick and David Nalbandian, and is closing in on his mentor Stefan Edberg, who was three times part of Sweden’s Cup-winning team.

Yet thus far, Federer and his beloved Switzerland have never won this most prestigious tennis trophy.

So when the prolific winner of other titles—now totalling 80—won the second of two singles rubbers against Italy’s Fabio Fognini in the semi-final tie in Geneva, it meant a lot.

For despite all his youthful efforts for Switzerland, his was, back at the start of the century, something of a solo effort to keep his country in the World Group, though one that he savoured. As recently as 2012, he recalled his emotion at winning a 2001 tie against the US while still a teenager, winning all three of his matches to advance to a quarter-final contest against one of the most successful teams in Davis Cup history, France.

He would win two of his three matches in that April contest, too, though it would not be enough. Even so, two years later, Federer won all three of his matches against the same opponents to take Switzerland to the semis, their best run since reaching the one and only final in 1992.

However, 2003 would be the last year that Federer played three ties in a season. After a quarter-final run in 2004—again winning five rubbers from six—his attention and physical effort were channelled into building on what was rapidly becoming unparalleled success in the singles arena.

It was an understandable choice. Against teams with the depth of Spain and France, for example, Swiss ambitions for the title on the back of Federer alone looked futile, though he continued, in every autumn except 2010, to win his rubbers in the World Group Playoffs to keep Switzerland among ‘the big boys’.

But with the passing years came the Swiss cavalry, in the shape of Stan Wawrinka. He and Federer first showed what a combined strength they could be by winning the doubles gold at the 2008 Olympics. Come 2013, Wawrinka hit the big time in his own right with a vengeance, breaking new ground at Grand Slams and Masters, and breaking into the elite rankings. And he it was who carried Switzerland through the World Group play-offs last year, when Federer was absent with injury problems.

2014, though, has also seen a resurgent Federer back to winning ways. And with two Swiss now in the top four, the pursuit of Davis Cup glory has become a real proposition.

Their first tie against Serbia was sealed in the first three rubbers against a depleted Serbian squad missing Novak Djokovic and Janko Tipsarevic. Then a Kazakhstan team that always punches well above its weight went the full distance, with Federer sealing victory in the fifth rubber.

Argentina without an injured Juan Martin del Potro, a GB squad with Andy Murray still recovering from back surgery and, in the other half of the draw, a Spanish team without Rafael Nadal and David Ferrer, all fell by the wayside.

In the semi-final tie against Italy, Federer in particular faced valiant efforts from Simone Bolelli and then Fognini, and with more match-wins in his legs this season than any other man on the tour—56 of them—not to mention a deeper run at the US Open last week than anyone else in the tie, Federer was not at his sharpest.

The crowd played its part in countering his nerves—for numerous times he faced break points—and the significance of sealing the match in a tie-break was clear for all to see, with a leap of joy worthy of the Michael Jordan Nike Airs that took centre stage in Federer’s opening match in New York.

He was paraded on the shoulders of his team-mates around a jubilant arena, but of course there is one big hurdle still to come, and that is against the mighty nine-time champions France. For at Roland Garros, a hugely talented French squad saw off the defending champions, the Czech Republic, led by Tomas Berdych.

It is not enough to count the 11 men that France boasts in the top 100, nor the five in the top 30. The two highest ranked men are both in the midst of concerted rises back to the elite rankings: Jo-Wilfried Tsonga is at No11, having been No5 in 2012, while former No7 Gael Monfils stands at No18 from No41 a year ago.

What’s more, Tsonga beat Federer to take the Toronto Masters title in August and Monfils had match-points against Federer in the quarters of the US Open. Tsonga also has a 3-2 record over Wawrinka, while Monfils has a 2-2 record against the younger Swiss.

Then France can also turn to the brilliant talent of Richard Gasquet, who beat Berdych in the opening rubber for the loss of only eight games.

Federer is unique among the players who will gather in France come November. Unless veteran doubles player Michael Llodra plays one last match in his retirement season, Federer will be the only man to have played in previous Switzerland-France ties: in 2001, 2003 and 2004—all at the quarter-final stage. Despite winning his rubbers at all three, France came out the victor twice, although the Swiss team won the only tie played on French soil.

Perhaps that is an omen. Perhaps Switzerland will never have such a good chance again, in a year when both Federer and Wawrinka have enjoyed surging form, and when potentially dangerous squads from Spain and Serbia are out of contention.

But chasing history, racing the clock, and playing for one’s country is a potent combination that can derail even the greatest, especially against such depth in talent, backed by one of the most vocal home nations, that the Davis Cup can offer. The last day of the 2014 tennis season could become something very special indeed.