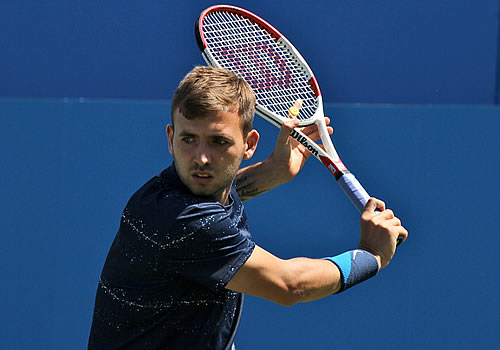 Dan Evans will be in action for GB in Glasgow Photo: Marianne Bevis

Great Britain’s team captain, Leon Smith, has been trying to cover all bases in the run-up to the Davis Cup semi-final blockbuster against old adversaries Australia.

Andy Murray, world No3 and the foundation stone of the team’s success in reaching this stage of the world’s biggest annual international team competition, was of course a given. The challenge, though, for a man close to the peak of his powers at the elite level of tennis, is huge.

Murray’s victories in three rubbers on three consecutive days less than a week after his semi-final run at Wimbledon is a case in point. And back in March, he had to sandwich two match-wins in Glasgow between Dubai and Indian Wells—just count the hour-miles and temperatures in that round trip.

This time, Murray comes hot-foot from the gruelling North American US Open Series, where he picked up the Montreal Masters title, reached the semis in Cincinnati and the fourth round in New York, to reach a tally of 59 wins in 69 matches—more matches than any other man in the top 20.

So who would provide the best back-up for Murray?

On the doubles side, there is plenty of depth in the shape of US Open doubles finalist and Murray’s brother Jamie. Dominic Inglot, too, is on streak of doubles success with the title in Winston-Salem and a semi run at the US Open. Both, though, play with non-British partners, so there still remains some flexibility in the selection.

But Smith clearly wanted to keep his options open on the singles side, perhaps ring the changes by bringing in fresh blood and fresh legs.

The 20-year-old Kyle Edmund broke into the top 100 just last month to become British No3 on the back of plenty of success on the Challenger tour this season. But trouble hit Edmund during practice when he tumbled and twisted his ankle, so eyes turned to James Ward, British No4, who played and lost in the quarter-final tie. He has lost, indeed, his last 10 matches.

So behind the scenes, the British No8 Dan Evans, currently ranked 300 in the world, was asked to join the squad, and he pulled out of a scheduled Challenger in Istanbul to get to the Emirates Arena for practice two days ago.

Was this a serious option? Well, the 25-year-old from Birmingham has not won a main-tour match in over a year—beating Jurgen Melzer to reach the second round at Queen’s in 2014—but after a lean period, he returned to the Challenger and Futures circuit, and this season has shown a return to form—29 wins from his last 33 matches.

Smith would not be drawn on his plans in the pre-tie news conference, telling the BBC: “I’ll go with my gut instinct. I’ve got some things in my own head to figure out and I’ll talk to the guys.”

But an hour before the official draw at the Emirates Arena, the news broke: Smith had indeed bypassed the higher-ranked Edmund and Ward in favour of Evans.

It was something of a surprise, even given Evans’ performance in recent months. He will have to take on two considerably higher ranked and undoubtedly talented Australians. Top ranked at No23 is 22-year-old Bernard Tomic, with No72, the 19-year-old Thanasi Kokkinakis, as their second player.

However, there is one other factor in the equation that could make a difference. In Evans’ only run to a Grand Slam third-round, at the US Open in 2013, the Briton won his only meeting with against Tomic.

Evans has also played six Davis Cup ties before, the first back in 2009, and won his first two Davis Cup rubbers against Slovakia in 2012, beating the current No36, Martin Klizan, in five sets.

“It wasn’t an easy one but having thought about it a lot, the fact that Dan has played an awful lot of tennis this summer, won a lot of matches, really helps, and he comes with a lot of confidence.

“Obviously Kyle, although he’s almost fit, he still had a fall the other day and I think at this stage it was wasn’t worth risking anything happening over the weekend. For James, the tie came maybe the wrong time for him after a summer that’s been quite tough results-wise, but he’s played a big, big part in the team to date and I’m sure he’ll play a big part in the future as well, but I felt that Dan was in the best place to win for the weekend.”

Asked if he had considered nominating three singles players, Smith was also clear: “No, I didn’t actually. It could be a possibility in the future but in Jamie and Dom we have two terrific world-class doubles players who are extremely confident, and the doubles rubber is going to be an important one. And as Andy said the other day, you can’t be sure Andy will play all three days. It’s a big ask for him so I want to have those options for the doubles absolutely come Saturday.

“At the end of the day, that’s what’s going to happen in team events, you have to whittle the numbers down, and the important thing, which I stressed to them, is that what we’ve been trying to breed here is this team ethos and team feeling. They’ll get over it and we’ll move on again, and hopefully if we can get through this tie, and if we did have a final, then there’s a hell of a lot to play for over the coming months.”

It’s certainly a bold move by Smith, but if it works, as Australian captain Wally Masur put it: “You have to make decisions. You look at current form, then you look at the actual court set-up, and how that plays into the hands of his team. He’s got a versatile team, he’s even got decisions to make with the doubles… does he slot Andy in on day two, how’s he feeling—Dom’s had a good season. If Leon gets it right he’s a genius, if he doesn’t people will be onto him.”

Play begins at 1pm on all three days of what is sure to be a high-octane, loud and passionate weekend, with GB in pursuit of its first Davis Cup since 1936 and Australia united as one behind their most prolific winner, Lleyton Hewitt, in his last Davis Cup.