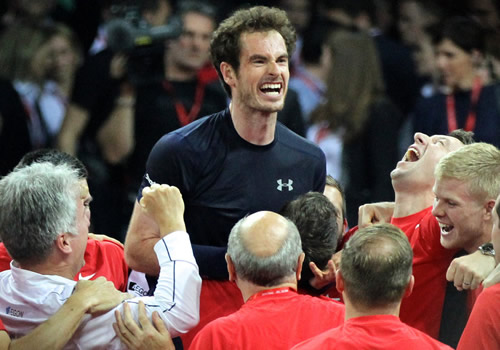 Davis Cup captain Leon Smith has named Andy Murray among a full-strength line-up for the Great Britain squad that begins its title defence at the Barclaycard Arena in Birmingham against Japan on 4-6 March.

It will be world No2 Murray’s first competitive action since his runner-up finish at the Australian Open, after which he flew back to the UK to be with wife Kim for the birth of their first child, Sophia, on 7 February.

All five members of the GB squad played during the 2015 campaign that won the Davis Cup for the first time since 1936 with victory over Belgium in Ghent in November.

In naming the squad, Smith told the LTA: “It will be a test for us but I’m confident in our team and I’m sure when the guys pull on their GB shirt they will give their all. We are lucky to have another home tie and it’s exciting to be returning to Birmingham. Our fans give us incredible support and we look forward to more of the same!”

He also had generous words for the individual team members.

“Andy Murray has once again demonstrated his commitment to the team and his country in making himself available to play, especially so soon after becoming a father. His outstanding performance at the Australian Open is further evidence that he is one of the world’s best players.

“Kyle Edmund has made good progress on the tour, has had a confident start to the year, and gained vital Davis Cup experience playing in last year’s final.

“Dan Evans has a wealth of Davis Cup experience and has made great strides in the last six months.

“Jamie Murray is arguably the most in form doubles player in world tennis, currently at a career high No2… and is playing the best tennis of his life right now.

“Further bolstering our doubles options will be Dom Inglot, who showed us what he can do in taking the best doubles team of all time to the wire last year in Glasgow. He is an established world-class doubles player who continues to play an important part of our team.”

GB or Japan will take on the winners between No7 seeded Serbia—with Novak Djokovic nominated in its line-up—and No12-ranked Kazakhstan.

The other Round 1 World Group ties comprise: