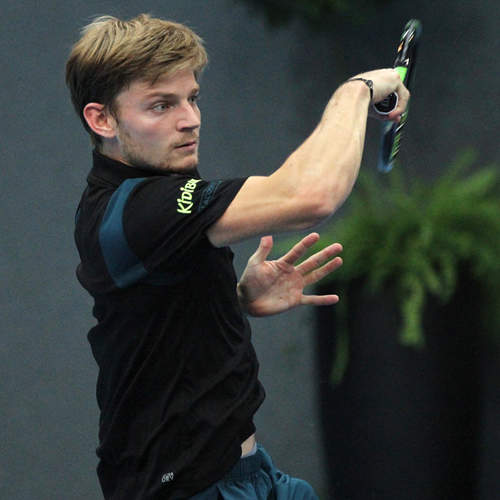 Belgium may be one of the smaller countries in Europe, and it certainly cannot compete with neighbours, Germany, France and the Netherlands when it comes to population.

But this nation has, in recent years, punched above its weight when it comes to Davis Cup—thanks in large part to two players who have also learned to punch above their weight in leading modest Belgium against the heavyweights of this international competition.

Now ranked 77 in the world, he has won just 15 main-tour matches this season, and three of those were in helping Belgium reach the semi-finals this weekend in Brussels. What is more, they included wins over top-20 opposition in the shape of Alexander Zverev and Philipp Kohlschreiber to knock out the fancied German chances.

Then there was David Goffin, the slight, nimble 26-year-old, all 68kgs of him. He worked his way into the top 10 for the first time this February, a finalist in Rotterdam and Sofia, quarter-finalist at the Australian Open, the semis and quarters in back-to-back Masters during spring—with wins over Novak Djokovic and Dominic Thiem into the bargain.

He was ready to make a big impression at Roland Garros where he reached the quarters last year, but suffered a freak accident, twisting his ankle on the covers at the back of the court. He made a tentative return to clay in July, but did not win back-to-back matches until a fourth-round run at the US Open.

Now, though, down at 12 in the world, he was back home, and the backbone of another great run for Belgium to the semis. Not since his first full season on the main tour, in 2012, had he missed a chance to represent his country: 13 ties and 18 singles rubbers won, and so successful has he been in rising to the team challenge, he won 13 of his last 14 Davis Cup singles rubbers. The one loss? To Andy Murray in the final against GB in 2015.

This weekend, with the four final teams fighting it out for their chance to play in the final at the end of November, and another 16 nations battling in the World Group Play-offs, Goffin was again in action, despite carrying a knee injury from the US Open. Only two men ranked higher than him were playing their part, No7 Dominic Thiem in Austria’s Group 1 tie against Romania, and the ever-committed world No5 Marin Cilic for last year’s runners up, Croatia.

But what of over-achieving Belgium? Perhaps surprising to many, this small nation was one of the first to join the Davis Cup family, and reached the final in its first year of playing, 1904. But Belgium did not make another final until 2015.

Then, in the space of two years, they were aiming to do so again, and the only remaining team never to have won the famous Cup.

In their immediate path was Australia, one of the most illustrious Davis Cup nations with 28 titles—outnumbered by only the USA. Team captain Lleyton Hewitt, himself owning one of the longest records in Davis Cup history, had some young and in-form talent at his disposal, too.

Top of the pile was Nick Kyrgios, ranked 20 with three titles last year and a final run in Cincinnati last month. Yet the 22-year-old’s outrageous talent has always been tempered by injury and fluctuating commitment. However, Davis Cup was different. Kyrgios revels in the team spirit, and proved his toughness with a comeback from two sets to one down against Darcis, 6-3, 3-6, 6-7(5), 6-1, 6-2, in 3hrs 36mins on his least favourite surface, clay.

Goffin won his opening rubber, 6-7(4), 6-4, 6-3, 7-5, over John Millman, and then, following the form-book, the No2 doubles player John Peers joined Jordan Thompson to trounce the Belgian duo of Ruben Bemelmans and Arthur de Greef.

So Goffin and Darcis went into the final day knowing they both had to win, and for Goffin, the fly in the ointment was that Kyrgios had beaten him in all three previous meetings.

Kyrgios’s serving in the first set was impregnable, with not a break point on offer to the Belgian, and after an hour, he sealed the tie-break with an ace, 7-6(4).

Goffin had made just a few too many errors but in the second set, the nimble Belgian polished things up perfectly. He converted his first break point of the match, and dropped only one point on serve to race to the second set, 6-4, pulling off a sequence of stunning backhand winners on the way.

Goffin continued to play his precision game, serving big and angling the ball from corner to corner. He broke in the third game, again with an arrow of a backhand down the line, and was beginning to get under the skin of Kyrgios. The Australian survived break points in a 10-minute seventh game, but Goffin was completely grooved, and aced for the set, 6-4.

Goffin continued to impress in the fourth set, holding with ease. Again it was in the seventh game that the Australian came under pressure, first from a forehand winner by Goffin, then a backhand winner, and a double fault from Kyrgios brought up break points. The normally restrained Belgian leapt in the air in celebration as his backhand again did the business.

But Goffin tightened for the first time to net an easy forehand, and then faced his first break point since early in the first set. Kyrgios went on the offensive to level the set, 4-4, but it was short-lived. A couple of blistering returns of serve from Goffin, and the Belgian broke again, and the Australian’s racket was broken too.

Now Goffin would try again to hold—this time for the rubber—and he did so in style with his 20th ace of the match, 6-4. He had hit 19 backhand winners, 20 more on the forehand, and made fewer than half the number of unforced errors. No wonder he was elated:

“It could be the best match of my Davis Cup career so far. I was focused from beginning to end, probably the best match with my serve… I finished on an ace, it was a perfect end.”

Now it was down to “Mr Davis Cup”, as Darcis has been dubbed. And he did not disappoint. He broke in the first game—just like Goffin, with a backhand winner—against the late selection, Thompson, who in theory should have been the more rested man. But Darcis has a tricky game, boasting lots of slice, angle and touch from his one-handed backhand, and a surprising turn of speed around the court.

He quickly took the first set, 6-4, but gave up an advantage at the start of the second set, and Thompson consolidated with a love hold, 3-2. Darcis began to look tired, but fought off two break points for 5-5, and then broke. A swift hold, and he had the set, 7-5.

It seemed to buoy the 33-year-old up, and he undermined all the attacking tactics of the Australian to break in the third and the fifth games, and did not give his opponent so much as a sniff at a break back. Two hours 20mins, and he had set, rubber and a place in the final for Belgium, 6-2.

“David did an unbelievable job for us today. I have never seen him play as well as this and I’m really happy I could finish it off.”

Belgium’s third chance to claim the title will come against their big neighbour, France, who have won the Cup nine times but not since 2001. As usual, they were able to draw from a deep well of talent—they have 10 men in the top 100—and were led by their two top singles players, Jo-Wilfried Tsonga and Lucas Pouille.

In the event it was Tsonga who stepped up with two wins in singles against an under-powered Serbia missing the injured Djokovic. And along with one of the best doubles teams in the world, Nicolas Mahut and Pierre-Hugues Herbert, it was too big a task for Serbia to take it to the final rubber.

The tie will be in France, who hold a 4-3 lead over Belgium in Davis Cup, but make no mistake: Belgium are up for the fight. Darcis concluded after today’s tie:

“I think it is the final we all dreamed about. Speaking about it a few weeks ago, we said, it would be so good if we could play you guys—but hopefully this one we can take.”