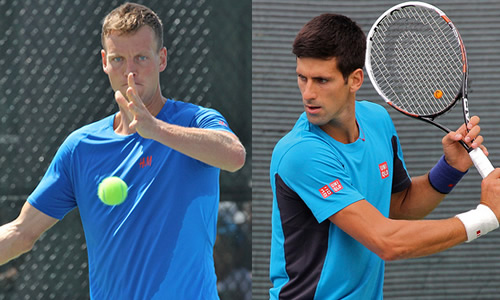 Defending champions the Czech Republic, despite entering the Serbian lion’s den of Belgrade this weekend, and despite seeing the formidable world No2 Novak Djokovic in their opponent’s corner, will begin as favourites to retain the most impressive trophy in tennis.

Djokovic, arguably the form player of the moment as the tennis season reaches its final stop on the 2013 tour, will take to his stage with an unbroken autumn run of back-to-back titles in Beijing, Shanghai Paris and, just days ago, the ATP World Tour Finals. Add on the two rubbers he won to take Serbia into this final in the week after the US Open, and he is on a 22-match-winning streak.

However, he will need every banner, every roar, every atom of enthusiasm that his home crowd can summon to take his country to its second Davis Cup victory.

Djokovic rightly identified the vital role of the Serbian faithful: “The crowd support is very important, maybe crucial… With their support, if it’s the same as what we have had in previous years, then everything is possible.”

The news that the home nation’s No2 man, Janko Tipsarevic, has been forced to pull out with a right heel injury sustained in Valencia last month, has been a mighty blow, especially in the aftermath of the 12-month suspension handed down to Serbian No3, Viktor Troicki, for missing a dope test in the spring.

The second singles spot instead goes 23-year-old Dusan Lajovic, ranked 117, whose only previous Davis Cup experience was playing the ‘dead’ rubber in Serbia’s win over Sweden in the first round last year. This time, the young player will face 15,500 fans and the nerve-wracking prospect of the 28-year-old world No7, Tomas Berdych, veteran of 25 ties, 25 singles match wins and 18 doubles wins in a decade of experience for his country.

Lajovic has not won a tour match since April last year, though he did win his second Challenger title of the season just two weeks ago in Seoul. He commented:

“I would say it’s very exciting! From one side, Tomas will be the toughest player I have ever played. From the other side, maybe the good thing could be that he doesn’t know me so I might have some advantage in the opening games of the match. I just hope that I can give my best and try to surprise him.”

Djokovic will first take on Czech No2, the 34-year-old Radek Stepanek, who was also in London last week as part of the World Tour Finals doubles competition, though unlike Djokovic, his work was done by the weekend. And there is also a fall-back man in the Czech squad, the 47-ranked Lukas Rosol, who won both his singles rubbers in the quarters this year against Kazakhstan.

Ranked 44, Stepanek was a key element in the Czech victory over Argentina in September, winning his singles rubber and, with Berdych, the doubles rubber too. Indeed Stepanek and Berdych are the Czech Republic’s most successful doubles partnership, with a 13-1 win-loss record. Their only loss in 14 doubles rubbers came to Spain’s Feliciano Lopez and Fernando Verdasco on clay in the 2009 final.

However, Stepanek has only beaten Djokovic once in their nine meetings and that was more than seven years ago when the Serb was 18 and ranked No81. The Czech admitted:

“There is no tougher cookie than this one, playing Novak in front of his own crowd after the run of form that he has had. Definitely it’s a challenge, but all I can do is try to play my best tennis and see where I can push him. I am ready to do no matter what it takes. If I have to be on the court five hours a day, this is my job. I’m here for the team and I’m here for my country to give everything.”

It is the final-day rubber between Djokovic and Berdych that stands out, though, and it could be the deciding factor in the title. Much will depend on how much the Serb has left in the tank, though he looked full of running in beating Nadal in the final of the World Tour Finals on Monday. He also enjoys a 14-2 advantage over Berdych, though one of those rare losses came in Rome this year.

Djokovic, like Stepanek, may also be called upon to play the doubles rubber as well as two singles if he can maintain his physical condition after such an intense run through the autumn.

The Serbia captain Bogdan Obradovic commented: “We know that Novak is playing the best tennis in the world so he is the one that is capable of winning three matches in this tie. We have discussed playing him in the doubles if he is mentally and physically ready to play that. When you have him on the court, the Czech team will have huge pressure.”

Still the Djokovic campaign looks like an uphill task, though. The Czech Republic are No1 seeds and are playing in their third final in the last five years. The squad defeated Spain 3-2 in last year’s final in Prague after Stepanek won the decisive fifth rubber against Nicolas Almagro, and it is almost three years since this nation last lost a tie, to Kazakhstan in March 2011.

Perhaps the most surprising fact, however, it that the Czech Republic is making its 32nd World Group appearance, the most of any nation along with the USA since the current format was introduced to the tournament in 1981.

But should the Czechs need any more incentive, they may find it in the absence of the captain who has led them to nine wins in succession. Jaroslav Navratil is recovering from a pulmonary embolism last week, his place taken by Vladimir Safarik.