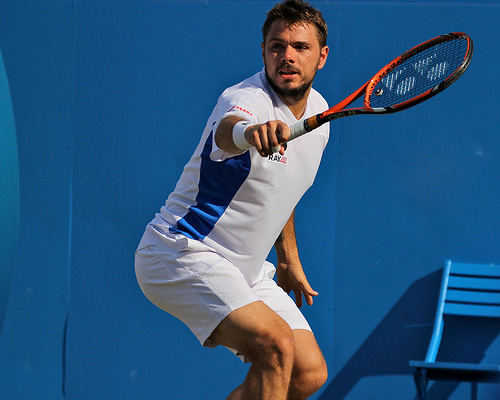 It is safe to say that the Davis Cup final between France and Switzerland has been one of the most highly-anticipated ends to the tennis season in a very long time.

First, Switzerland—and its most famous son Roger Federer—had never won this prestigious title. But after committing to the event throughout a resurgent 2014, he had the chance to fill the one glaring hole in his packed resume.

That the form of Stan Wawrinka had crescendoed over the last 12 months to take in his first Grand Slam title in Australia, his first Masters in Monte Carlo and a career-high ranking of No3—higher for a few months than Federer himself—just added weight to the Swiss cause. The stars were aligning for this popular duo.

Second, with many of Spain’s armada of players sidelining the Davis Cup this year, France became the strongest and deepest squad in the competition. All four players, even the doubles nominees, were inside the top 26 singles rankings, and three had enjoyed top-seven status.

Just as significant, all four could count victories over both Federer and Wawrinka. France, too, has been one of the most successful and longest serving teams in Davis Cup, and their campaign for a 10th title would take them to third in the list of winning nations, exactly 100 years after France’s first tie.

Within this drama, though, was the mini-drama entitled “Federer’s back”. The Swiss, with uncharacteristically poor timing, suffered a flair-up of the chronic back problem that has dogged his career during his World Tour Finals semi against, of all people, fellow Swiss Wawrinka last weekend.

So bad was the injury that Federer pulled out of the final against Novak Djokovic, and the Swiss star did not appear on the indoor clay of Lille until late on Wednesday. Right up until he strode into the draw ceremony with his team-mates, there remained a question-mark over his head—but there he was, signed up to play Gael Monfils in his opening singles.

But this particular tie also had individual back-stories to add extra spice.

Federer would face two Frenchman who have enjoyed their fair share of success against him. Good friend Tsonga, ranked No12, beat Federer, 7-5, 7-6, in the final of the Toronto Masters this August, and the Swiss came close to defeat on the clay of Monte Carlo, too, coming back from a set down and a tight tie-breaker to win the third, 6-1. Notably, Tsonga also beat Federer on French clay at last year’s Roland Garros, in straight sets.

Gael Monfils, back to No19 after repeated injury woes, looked set to beat the Swiss in the US Open quarter-finals this year. Federer came back from two sets and two match points down in the fourth set to seize a five-set victory. Monfils took the Swiss to three sets in Cincinnati, too, and beat him in Shanghai last year.

And should Arnaud Clement sub a different nominee into Sunday’s matches, Benneteau—who reached a career-high ranking of 25 this week—had also caused Federer problems: He led the Swiss by two sets to love in Wimbledon 2012, and beat him in Rotterdam last year. As for Gasquet, he had twice got the better of Federer on clay.

Wawrinka was far from immune to France’s flair, too. The French-speaking Swiss was down two sets to love to Gasquet at Roland Garros last year before winning, 6-8 in the fifth. Meanwhile, Tsonga and Wawrinka exchanged five-set wins at the French Open in 2011 and 2012, and shared their only two meetings last year, both on clay, both in three sets.

Wawrinka and Monfils had shared their four previous matches, while the Swiss lost the last three of his four matches against Benneteau.

And there was the rub: If Federer’s back could not last the course, the Swiss team could only fall back on their doubles nominees, both ranked outside the top 200, while if France was hit by injury, there was plenty of high-quality back-up.

Add in one of the biggest tennis arenas ever to stage a Davis Cup tie—over 27,000 spectators broke the previous tennis record in Lille’s vast football stadium—and the noise and expectation could hardly have been higher.

First up was Wawrinka against Tsonga, and it did not take the Swiss long to dampen the blue-drenched crowd: He opened off with perhaps his finest tennis since winning the title in Melbourne in January.

Wawrinka had shown similar form in taking Federer to a final-set tie-break in the London last weekend, unleashing a fluid power-game to both wings from both wings that, at its best, can take the breath away.

And he played the kind of aggressive game that made such inroads through the last 18 months, broke in the fourth game, and played a majestic backhand down-the-line winner to hold for 4-1. Tsonga, apparently unable to respond to Wawrinka or the home crowd, was broken again, and the Swiss was up, 6-1.

Wawrinka had made 14 winners to just four from the usually attacking Frenchman. But Tsonga roused himself to reverse the trend in the second set, and he too broke in the fourth game, threw in more touch and variety, and served out 6-3.

But come the third, Wawrinka refocused and steadily gained dominance again to break twice for the set, 6-3, and he never looked back. It was glorious stuff, and he knew it. With a quiet strut, he made a second break with a searing winner, 5-2, and rounded off the match with a volley winner, 6-2, his 61st winner of the match—more than twice the number of errors.

And so to Federer and to a complete reversal of fortunes.

How bad his back was we may never know, but from the off, he looked inhibited in lunging to the backhand, and resisted coming to the net in the early stages, not helped by lower than average serving.

But his other problem was Monfils, whose charismatic and effortless power had torn open Federer’s game for the first two sets—and more—in New York. And unlike Tsonga, the showman in him truly did engage the crowd.

Federer held his opening service game but could not win another in the first set: Monfils surged to a 6-1 lead, having won all 17 points on his first serve, and scored 22 winners to Federer’s eight.

The Swiss was broken in the third game of the second set, and never looked like breaking the Frenchman. Monfils took that set, too, 6-4, not just with winners down the line but with tactical nous, pressuring the Federer backhand at every opportunity. This time, the Frenchman’s first serve was down at below 40 percent, but he dropped only two points on his second serve, 14/16.

Federer managed to hold onto the whirlwind for the first four games of the third set, but a double fault and a dreadful forehand wide of the court handed over the break in the fifth. Two volley errors from the Swiss at 3-5 sounded the end of what became, at times, a difficult-to-watch contest as Monfils leapt his way to victory with a final break, 6-3.

It was a dejected Federer who walked from court as Wawrinka gathered up his bags, but it was an elated Monfils—so close to victory over Federer in New York—who had no lapses this time, focusing to the bitter end and scoring some remarkable stats in the process: 44 winners to 18 errors.

So the first day of action took this tie no further forward. It closed with questions about Federer’s health, who would play the doubles rubber for the Swiss, and what kind of tennis could be expected from the outstanding players of the day in their Sunday face-off… assuming the title had not been determined already by the first singles match between Federer and Tsonga.

As the song goes, “there are more questions than answers”, and with so much at stake, that is what makes Davis Cup so compelling.

Federer takes positives out of Monfils loss, but tight-lipped about doubles